Miniature Figurines in the Photography of Chris Buck

Where did the idea for the Likeness series stem from? Tell us a bit about your 3D-printed self. 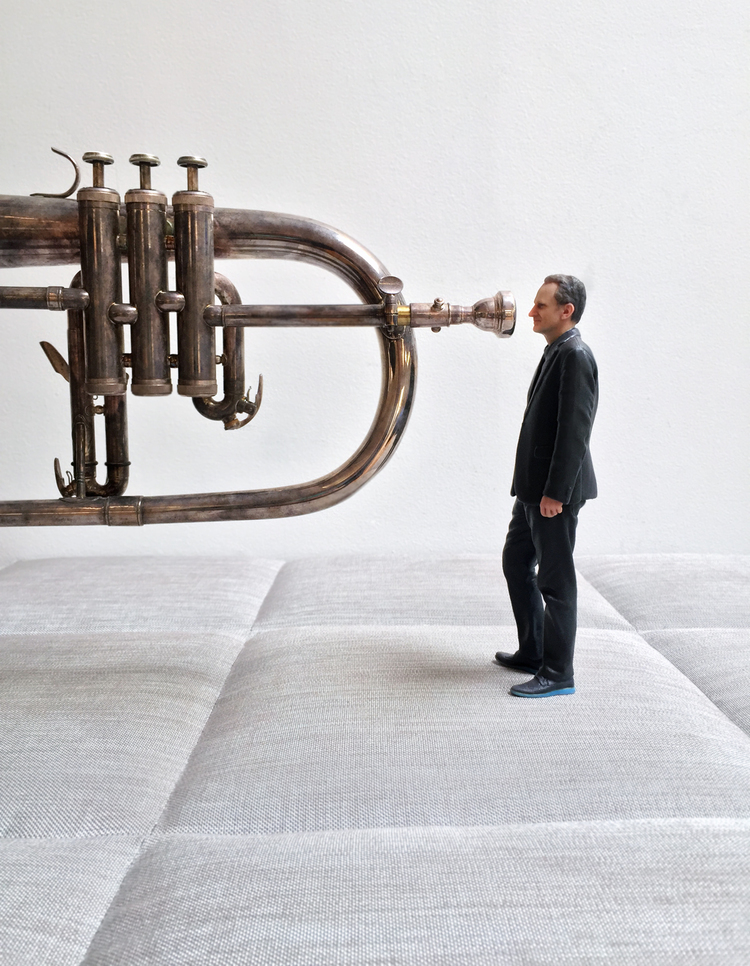 A friend in mine had mentioned a pop-up shop in Chelsea Market offered 3D-printed figures. I went by the DOOB™ booth to check it out and was very impressed with the 3D-printed work on display. The examples had great detail and were solid replicas of the team working that day. I returned to the neighborhood and pursued my own 3D-printed self.

Originally, I had no plans to show the work, I just found the miniature me to be both weird and cool.

What did you learn through your work with the Likeness project? 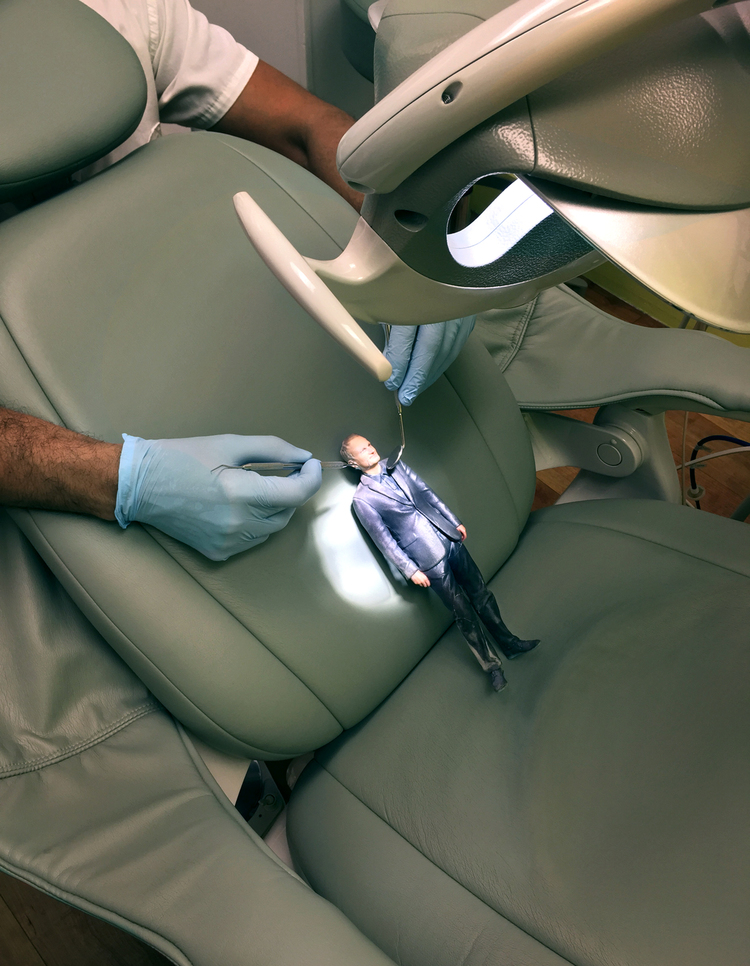 Well, what’s interesting is that in looking at my photography in general, I always approach my portrait work by molding people into doing what I do, or what I would do. In that sense, my subjects conform to Chris Buck. So if you see awkwardness or frustration in the picture, that’s more me than the subject.

The Likeness series allowed me to show things from my life in a way that my other work doesn’t. The work was in a playful context, overtly imaginary. Take, for instance, the shot in a crappy hotel room with the figurine drunk on a bottle of bourbon. I was able to do that effectively because it was playful and silly, both odd and funny.

What I enjoyed most about the project was that I was creating natural self portraits, separated from me. I was both the photographer and the subject all at once. It was the ultimate dream of a portrait photographer realized. 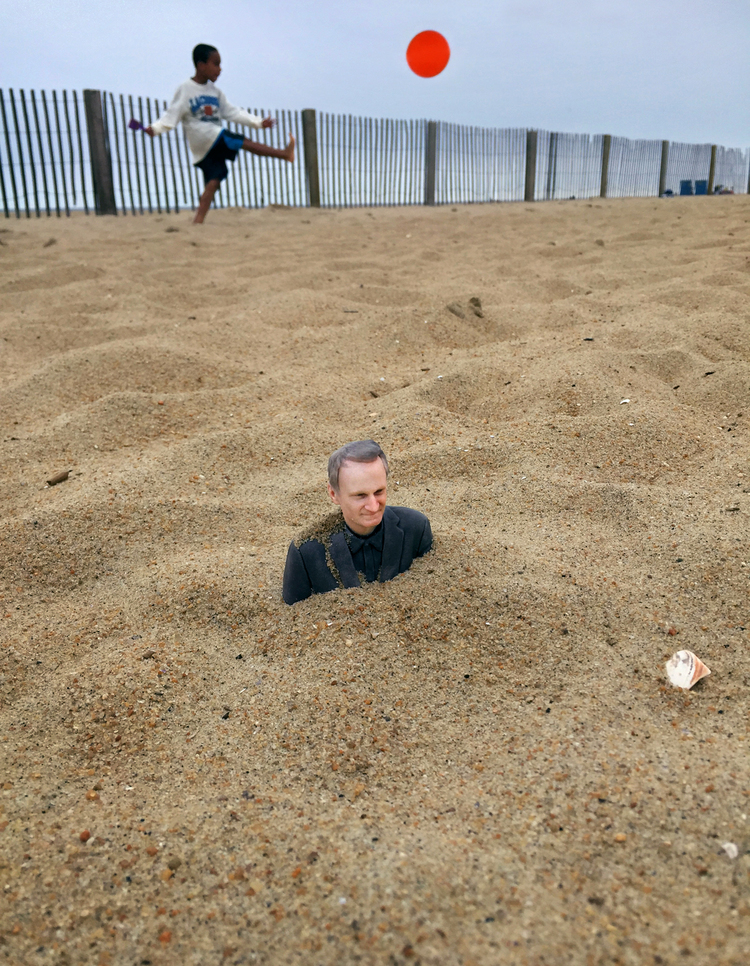 What has been your favorite Likeness photo thus far?

I would break this series into two groups: photos driven by content vs. photos driven by visual. I think some of the best #bucklikeness photos, and the most successful ones, have been driven by both content and visual. Two that stand out in my mind as having interesting content that’s also complex and visual would be: the frustrated Likeness in front of the urinal and the one where he’s buried in sand.

Tell us a bit about the figurine’s demise which resulted in the end of the Likeness series.

After I first had the replica made, I was in Los Angeles for 2 weeks and shot with him a lot out there. 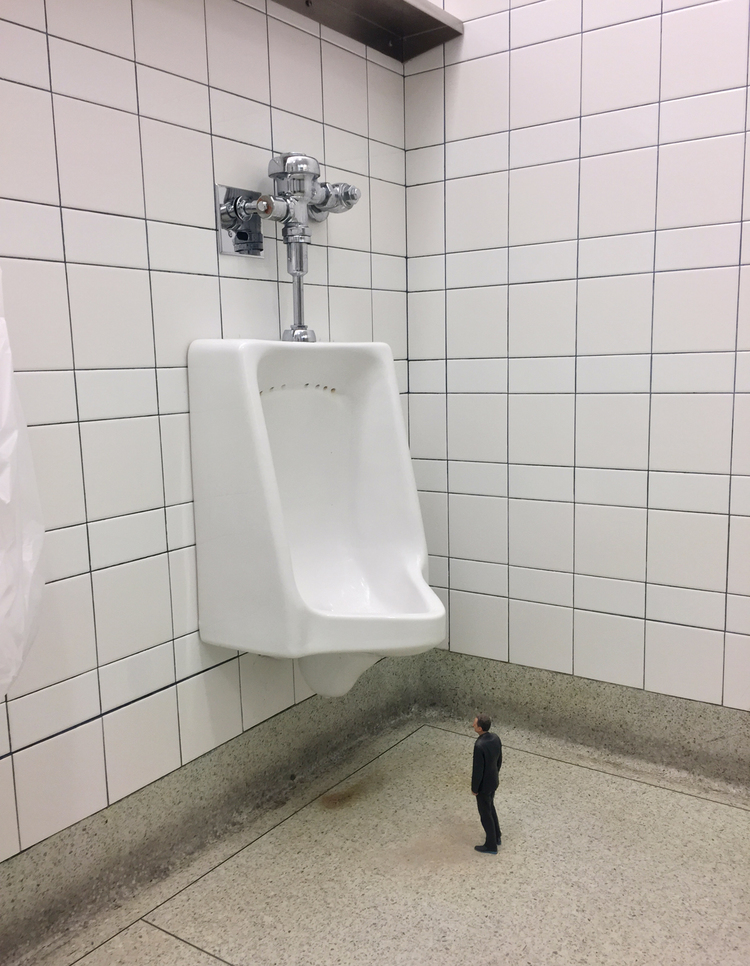 When I was in San Francisco for a short while, he ended up falling off a shelf. I glued him back together and kept taking photos. So it’s a bit misleading, you see, that the last image in the series was actually taken towards the beginning. I put him back together with rubber glue, but one foot kept breaking off.

The Likeness series is done now. Anytime I went anywhere, I had to take the replica along. I took #bucklikeness on vacation, to the beach – anywhere I went, he came. It was very distracting and an enjoyable series, but I never wanted it to become my whole creative identity. 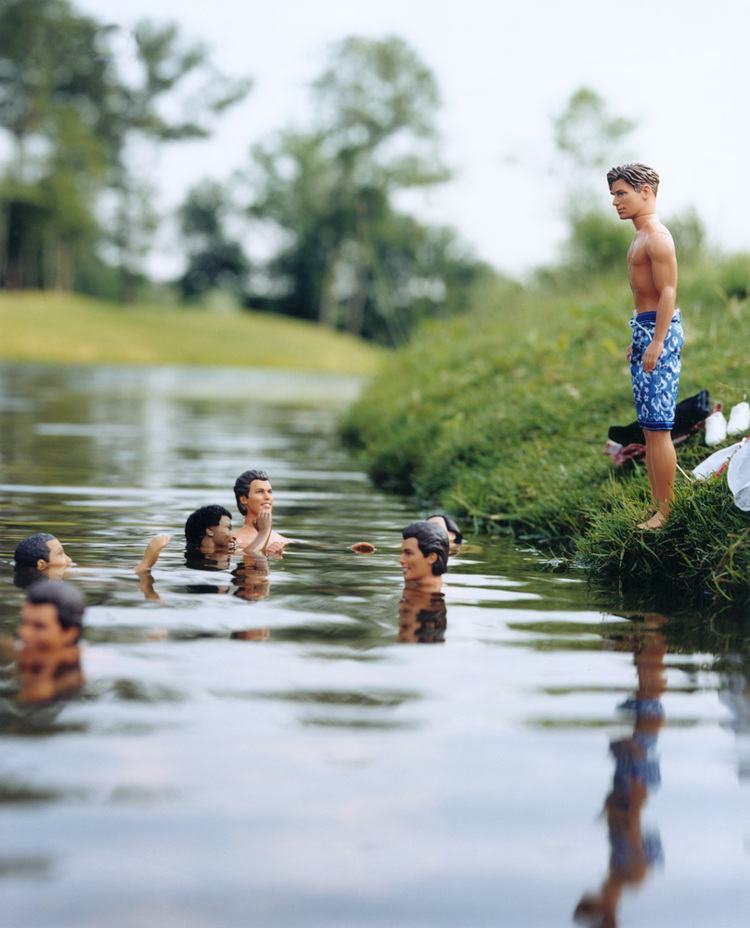 David Levinthal’s work inspired the Phobia series, which was featured in Outside magazine. The Likeness series took things a bit further and made the work more personal.

There’s something appealing about miniatures. They look like our world, but they’re not our world. I remember loving the other worldly quality of works by Ray Harryhausen. When his skeletons moved in Jason and the Argonauts, there was a sense of realism, but something was also off.

When it comes to miniatures, even when they are well done and really alluring, something is still a little bit off. And that captivates viewers even more.

Do you have any favorite artists or designers working in miniature? 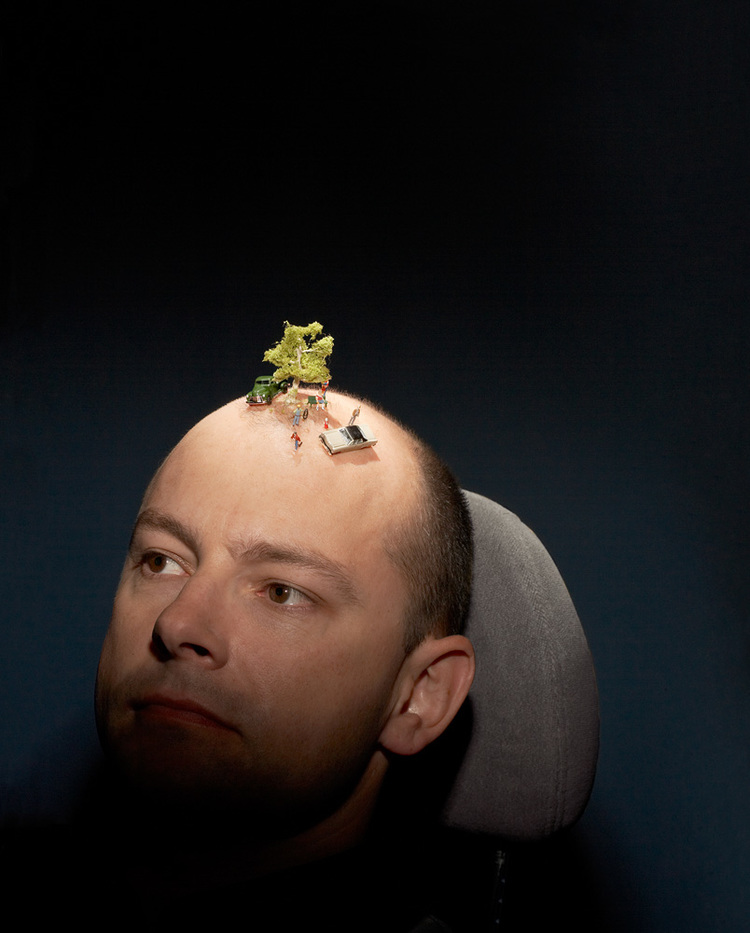 I enjoy the work of David Levinthal and very much liked Corinne May Botz’s book The Nutshell Studies of Unexplained Death.

I don’t consider myself a miniature expert by any extent. A lot of people are working in miniatures, and there’s a range of hobbyists and serious artists, but all of it is interesting. The people working in this are so strong and dedicated to their craft. What worked well with the Likeness series was dabbling with contemporary technology. It provided me license on to put on my own creative spin on the work. 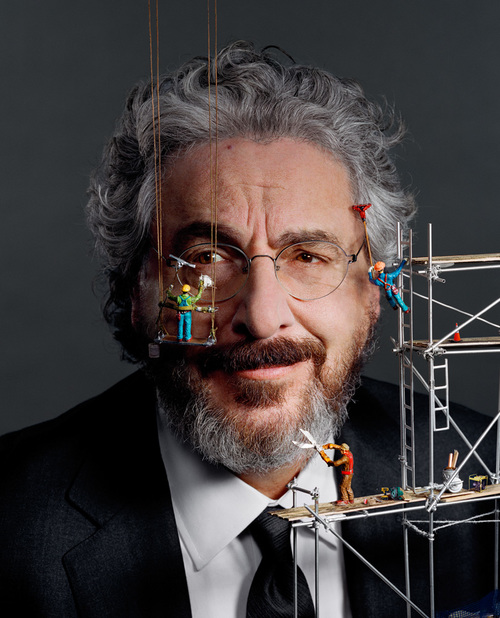 Some people are compelled to be creative. If I didn’t have to make art to support myself, I would still make it. It’s irresistible. There is something in me that drives me to create. I have to do this, whether “this” is putting together a family photo album, researching my family history, or working on professional photo projects. I have to do this stuff because it’s in my DNA. So, even if my schedule was completely cleared, I would still take the time to work on creative projects.

I’m also interested in the conflicts within us as human beings: who we are and what we want to be. I am inspired by concepts of morality and goodness and questions surrounding these aspects of humanity. And, I am also drawn to the dark side as well. That mix shows up in my work a lot. 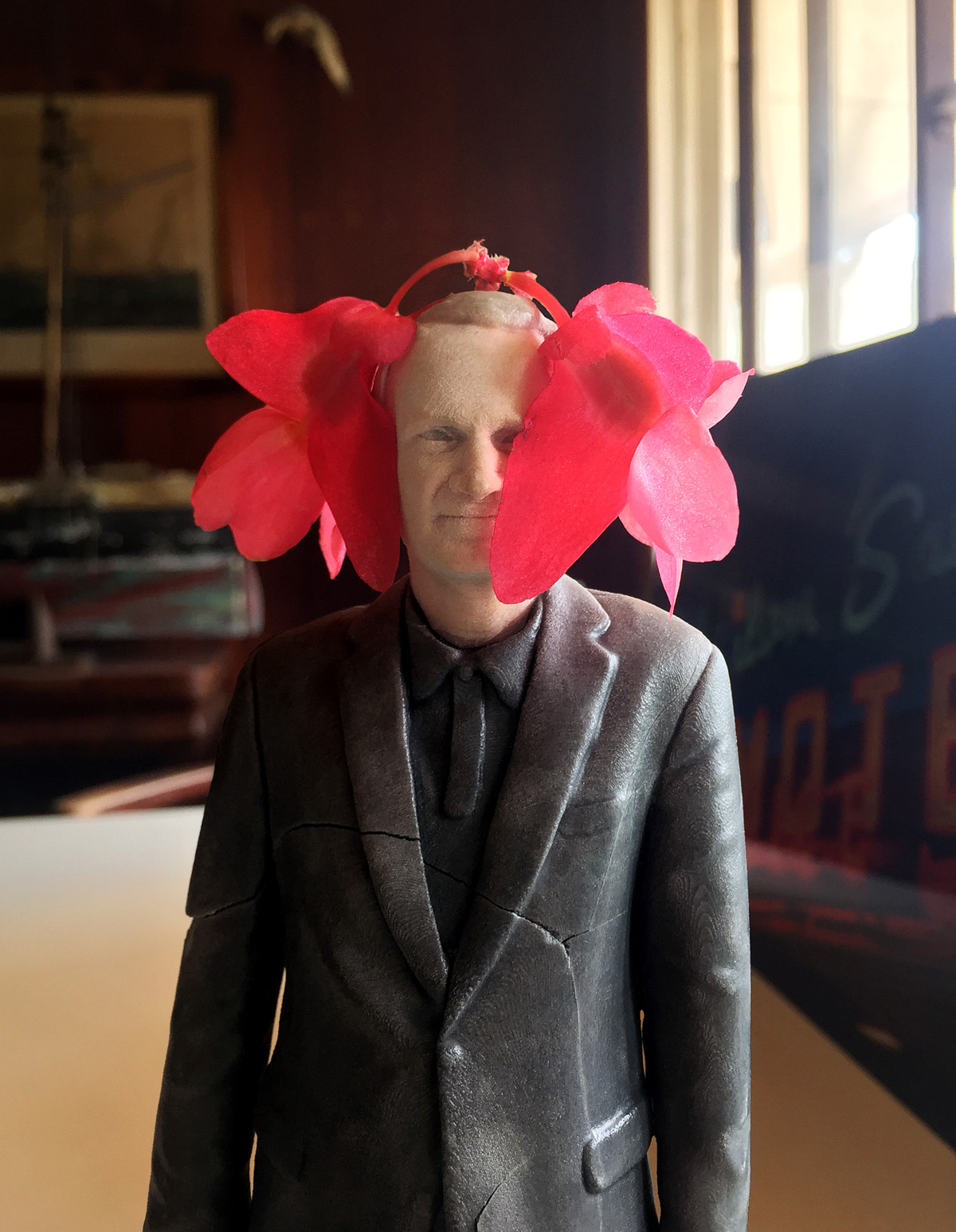 One of the dangers I see with young people is that they become too inspired by what moves them. I would love to see more young artists reactive against things rather than inspired by things. For instance, with miniatures, if someone were to look around and say, “the way people are making miniatures today isn’t right at all. I want to make miniatures the way they should be done,” then they would create more interesting work as a result. When you deem a field to be exciting and want to become a part of it, you unintentionally might be creating more of the same work, yielding less growth or movement than if you rebelled against the norm or standards of that particular industry.

I hope that young or new artists can share another way of doing things. If this up-and-coming generation shared a truer vision of what should be happening in the field, then they’re ultimately rejecting the current wave to create a new wave. 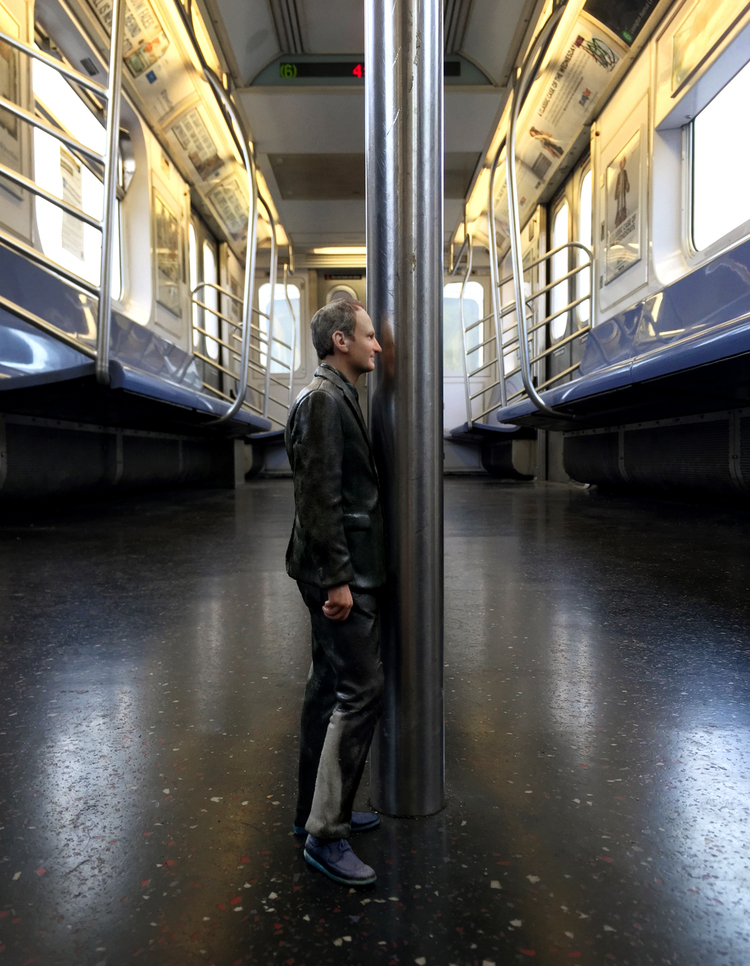 So, even if it’s rejecting what I do – if I’m the old guard and I’m wrong – then that’s awesome. And you should do that. Put me in the past, I’d love to see what you come up with.

Is there anything else you’d like to add about the Likeness series?

When I first saw and held my 3D-printed replica, it was crisp, clean, and the suit was dark. It didn’t take too long for it to fade. Eventually it became shabby and broke. It’s interesting that it had its own life. And in a way, it echoes what will be my life. The Likeness project had a biographical arc: youth, middle age, old age, deterioration, and death. And so, I felt comfortable letting it end because all things end. I wanted to acknowledge that [death]. It’s a fitting way to end it. The replica aged and demised; he eventually slowed down and died. 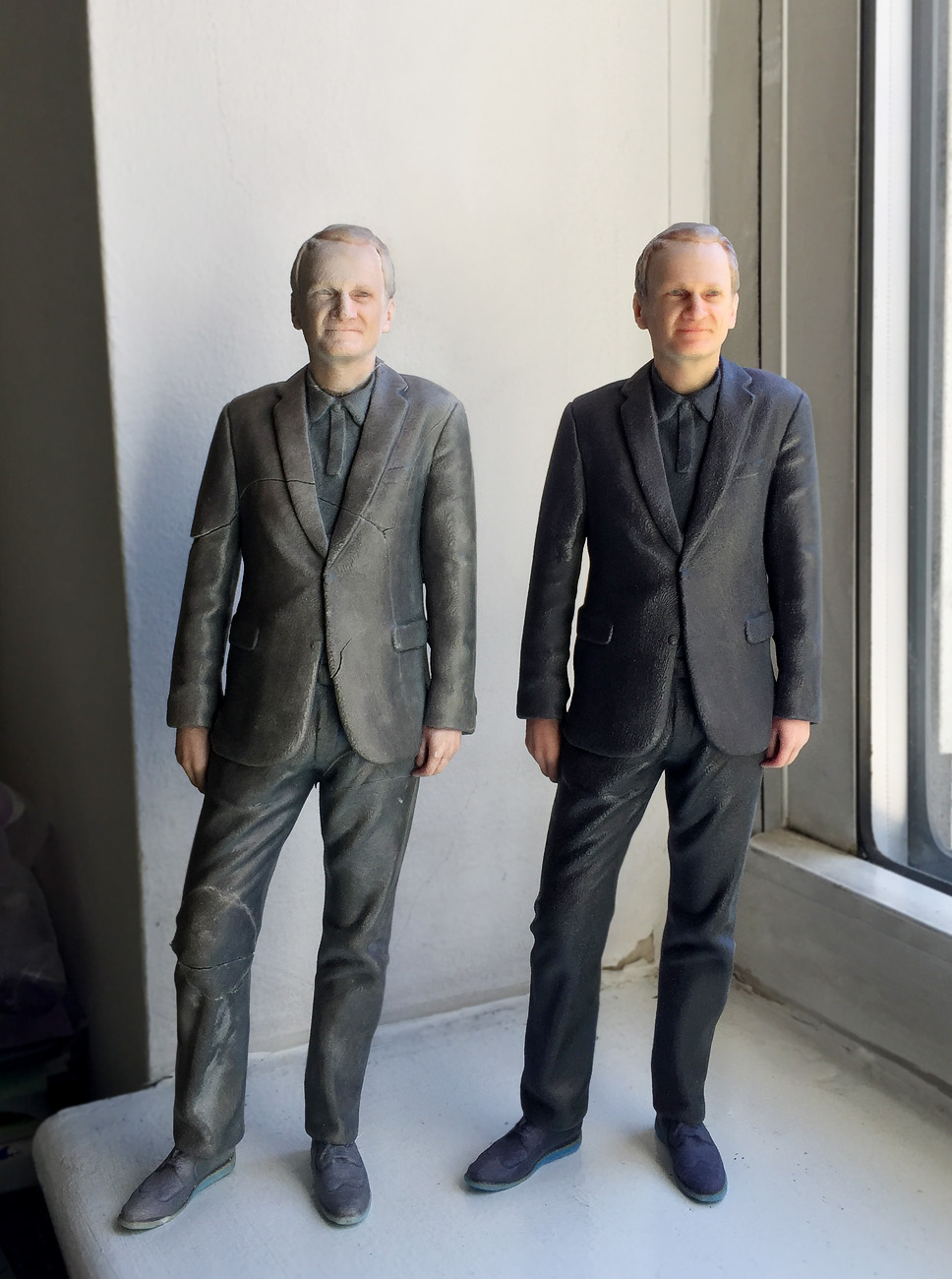 Closing thoughts on miniatures or replicas?

The field of 3D photographic technology could open up new doors in the field of miniatures. I think it’s exceptionally interesting and I also wonder how miniaturists will react against it, as it removes some of the craft of creating miniatures by hand. To me, 3D printing is the equivalent of representational painting, where all of a sudden photography comes along and ultimately represents life better than paintings do.

Chris Buck is a photographer based in NY and LA. His clients include Google, Xerox, Old Spice, Dodge, GQ, The New Yorker and The Guardian Weekend. He was the first recipient of the Arnold Newman Portrait Prize in 2007. His first book, Presence, was published in 2012. Follow Chris Buck on Instagram, Tumblr, or visit chrisbuck.com to enjoy more of his photography work. 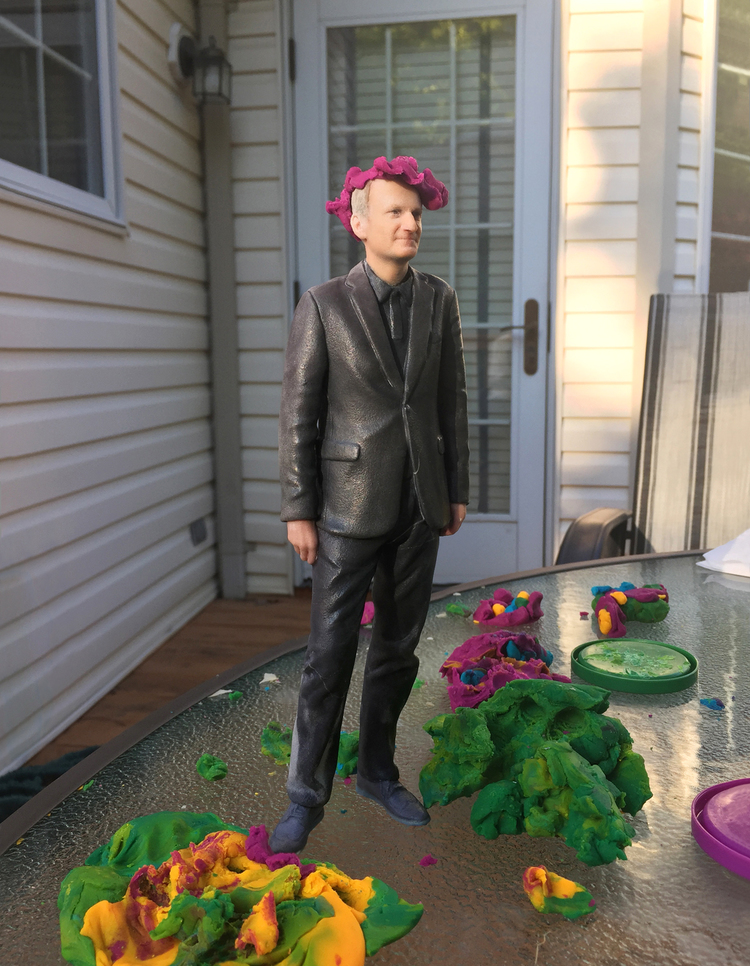