My earliest memory is I was 5 years old or so and had a shoebox. 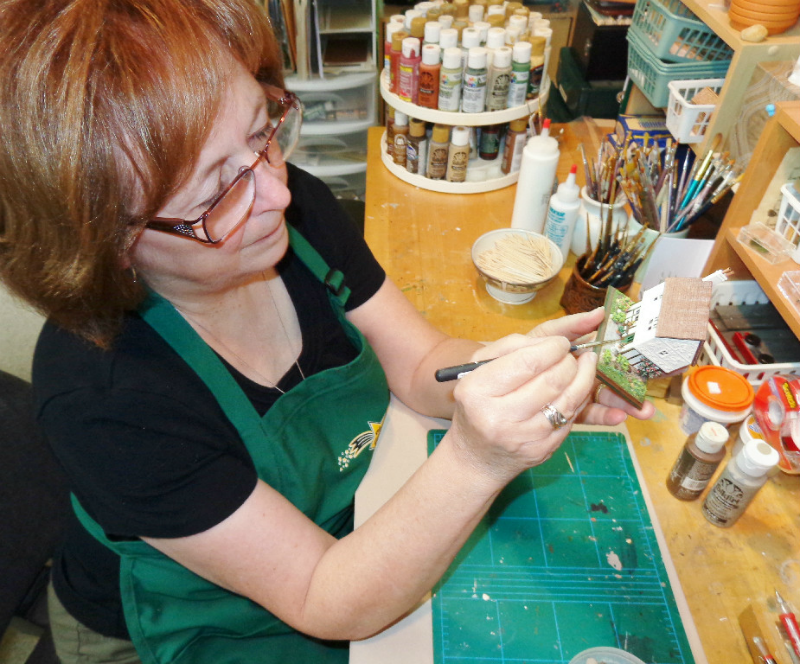 I wanted to make a house out of it, so I did. That was just me. I always loved working with my hands. At Christmas time around that age, I received a kit to make doll hats. I made them all day and all night. And when my parents told me to go to bed, I cried and cried. I was just so absorbed in making hats for my dolls.

I’ve made miniatures all of my life. There honestly hasn’t been a time in which I haven’t done them. When I was about 12 years old, I was reading through House Beautiful magazine and came across Chestnut Hill miniatures ads. I saw them and said “wow!” because I didn’t know anyone else who made miniature things at that time.

My mother had a dollhouse that had been hers and a few years earlier, she gave it to me and my sister for Christmas. It was a 1920s style house, created by my grandfather who was an engineer. 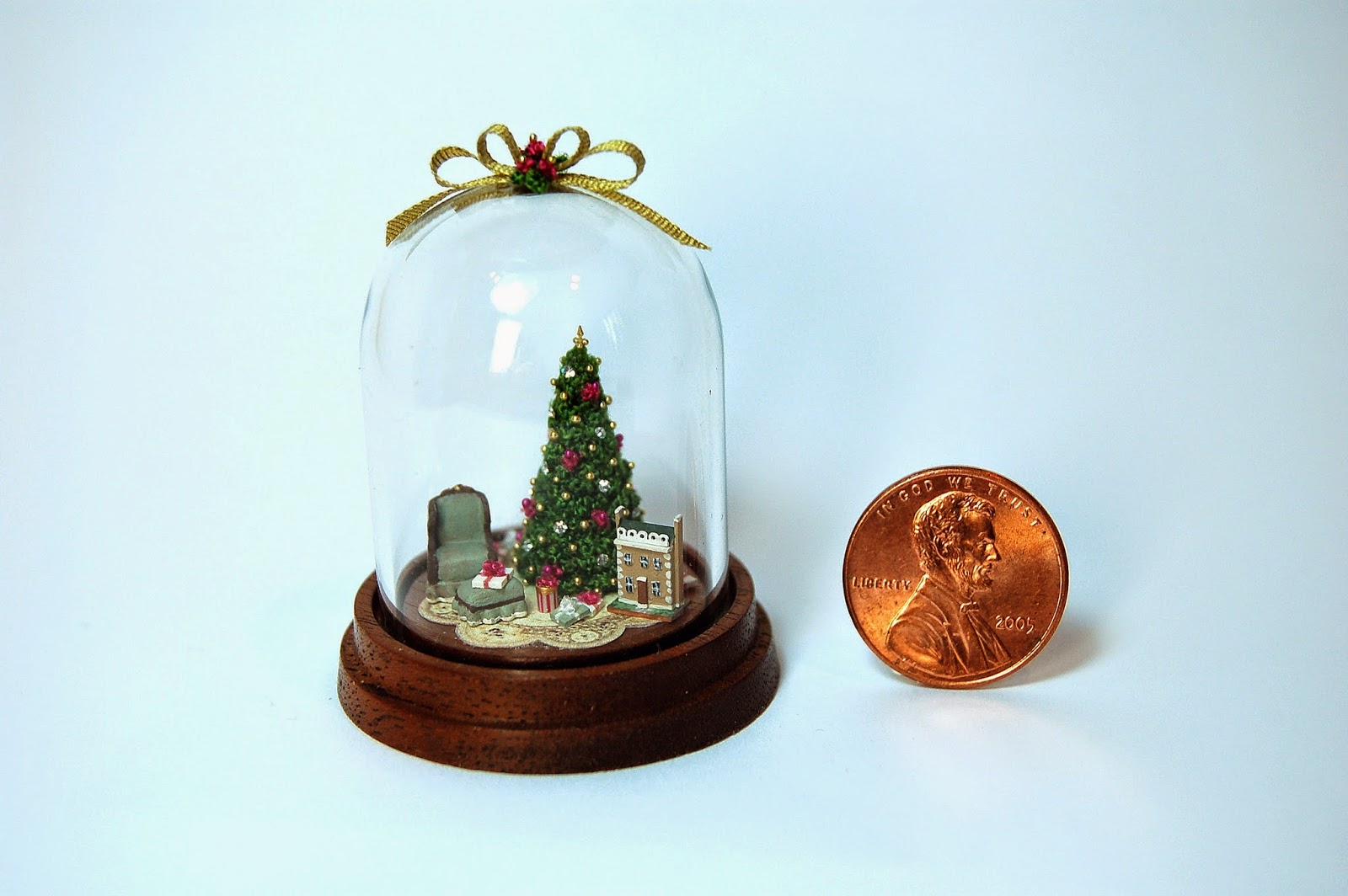 It was made by loving hands at home, complete with ceramic sockets in the ceiling, screw-in light bulbs, and furniture from England. Much of the furniture was from England.

This beloved dollhouse is currently in my sister’s possession, and we’re decorating it for the umpteenth time. Though she has it at the moment, it belongs to both of us.

I was steered away from going to art school by my family, so I  was an Art History major in college. I didn’t know what I wanted to do afterwards, so I did all sorts of different things for a number of years. I managed a clothing boutique and ran a shoe store before moving to Los Angeles, where I worked first at Sotheby’s and then with an independent appraisal firm. 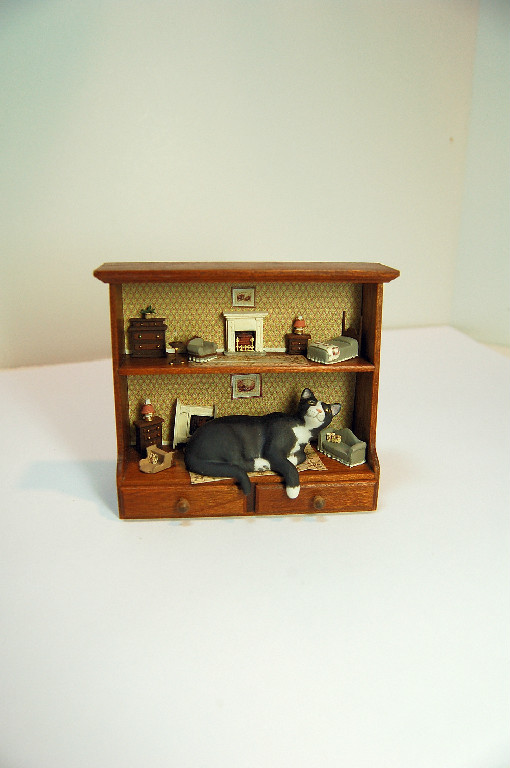 I continued to make miniatures for myself all throughout the years. Eventually, when I was in LA, I saw The Making of ‘Star Wars’ documentary that featured special effects models. After seeing some of the models used, I realized, “I can do that.” I had a friend from art school who was then an Art Director in Hollywood who came over to my house to see my work in miniatures. I showed him a miniature Victorian apartment building I had constructed as well as some mini sushi. Soon after, he helped me secure a job interview, so I brought photographs of my work and some things I had made. After hearing, “have a nice day, we’ll call you,” I decided now was the time for persistence. I went by the shop and talked to the guys in the shop. I showed them my work and spoke to them at great length. They put in a kind word for me, and the shop owner called me back to discuss my salary.

For the next 12 years, I worked on films and television. I worked at all kinds of model making there, including what are called “hard edge” models – space ships and such. We did a lot of models of the space shuttle for movies and museums. I made a tiny shuttle cockpit that you could hold in the palm of your hand, and the whole crew worked on a full size replica of the cockpit that Sally Ride told us was better than NASA’s! 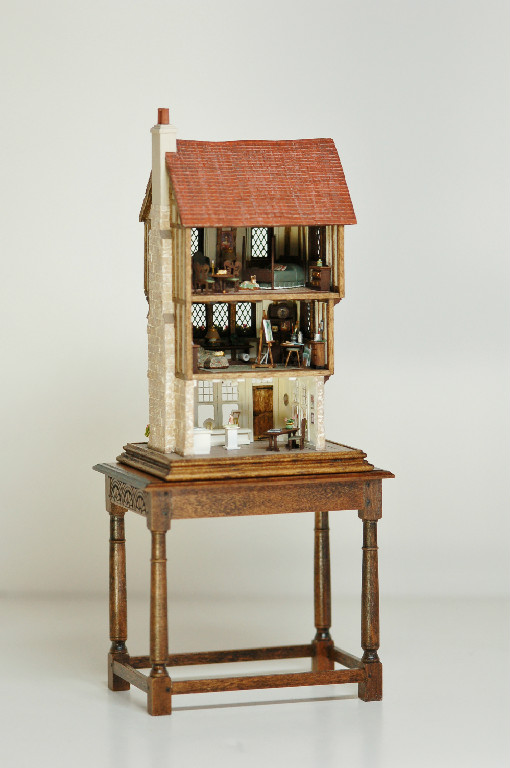 The next shop where I worked, Apogee Productions, was a particularly great place, full of talented people who worked closely together. You felt more like a creative partner than an employee, and we had a lot of fun together, along with all the hard work. I learned so much during my years in Hollywood, but the most important thing I learned was that it was possible to make just about anything.

What other projects did you work on with the Apogee team and others?

I created a number of landscape models. It wasn’t all spaceships, cars and tanks at the time. On the contrary, I became quite well known for my landscaping technique. The Australian director Peter Weir once told me how much he liked my trees.

During my time in the film industry, I worked with other directors such as John Dykstra, Steven Spielberg, Ridley Scott, and more. 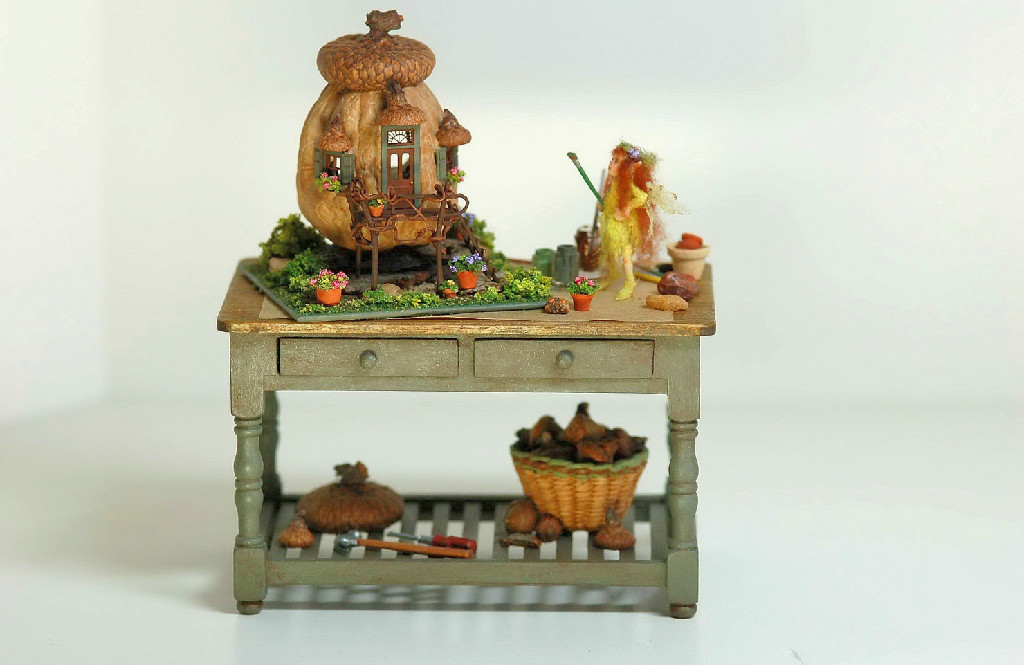 I worked on the 1988 Child’s Play movie, about an evil, killer doll named Chucky. Since digital effects weren’t much used yet, they used an animatronic Chucky for much of the film; but the action required things the animatronic doll couldn’t do. We had to build giant furniture so that a little person in a Chucky suit could do those scenes, and appear to be the same size as the doll.

Each project had its own time range. One time, we worked for 6 weeks on a house that was supposed to explode and burn down in one shot. If things didn’t work properly in the first (and only) take, it was back to the drawing board.

A time later, in the late 1980s, things slowed down in Hollywood with the influx of digital effects. I went to Doug Trumbull‘s Berkshire Motion Picture in Stockbridge, Massachusetts. The shop was located in a wonderful old mill building. We created extensive 1:12 scale models for Back to the Future: The Ride at Universal Studios in Florida; I was the foreman for the Hill Valley segments.

How did you then transition from the film industry to the world of miniatures?

Later, I moved to New York, and worked on tabletop projects for food commercials and such. I worked on and off and eventually left film to work at a toy company, where I became operations director. I was making miniatures at home during my free time. 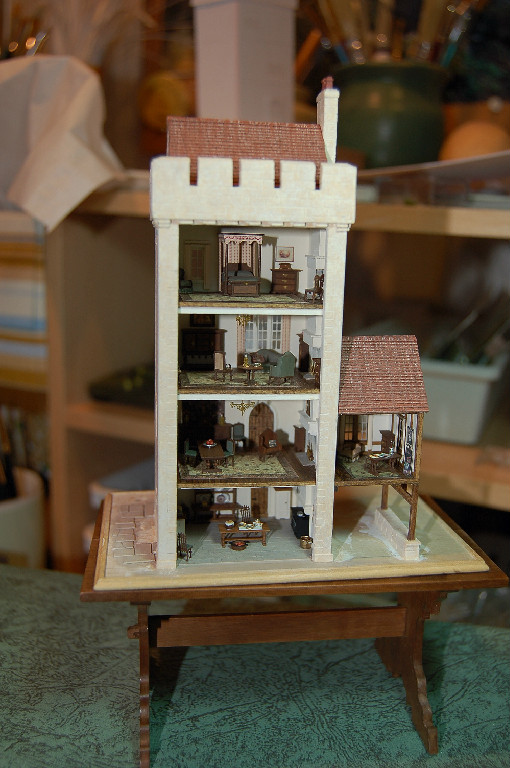 I always kept 1:144 scale works I had created during my time in the movies, that I had made just for me, just for fun. I held on to those works and looked at them fondly. I created replicas of vintage dollhouses and one day bought an unpainted one made of resin. I kept it on my workbench and would sit there and have a bit to eat at lunch and work on it. I eventually finished it and thought, “I could do that some more!” I created three houses by modifying N scale model railroad kits, and a friend took them to Philadelphia Miniaturia in 1992. It was a challenge to see what I could do and what I could be happy with. To this day, it continues to be. For any artist, we love coming across something new to figure out.

Don’t make too many duplicates. If it becomes routine, it ceases to be art.

New projects in the works?

I just spent some time in England after the Kensington Dollshouse Festival. I saw many Elizabethan houses and gardens. I will likely be working on one of those in the future. I also visited Saffron Walden and was inspired by countless pargeted houses with fancied plasterwork. 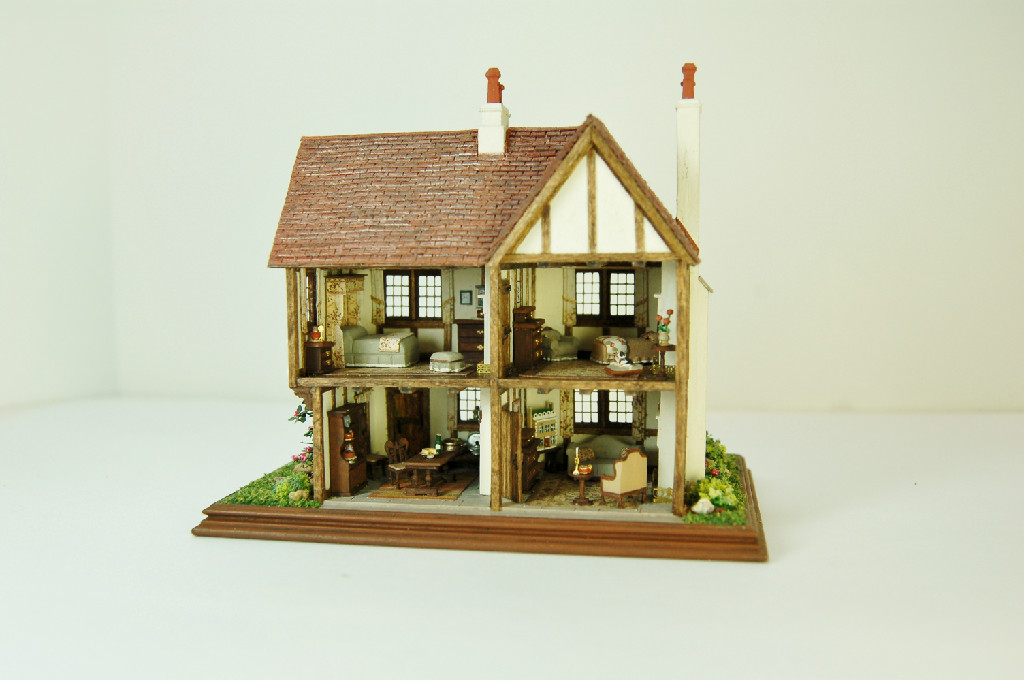 Few remain from the 16th and 17th centuries as a result of urban fires.

Way back in the 1970s, I was making miniatures at home hadn’t started to do shows yet. I was living in LA at the time and attended a show in Santa Monica with my husband and we were looking at a woman’s table who made food. He looked at her stuff and said, “you can make something better than that.” The woman looked up and asked me, “oh, are you an artist too?” I didn’t need validation, but I thought, “yes, that is what I am,” and was delighted by that truth.

One time I was sending out a little box to a customer and was insuring it at the post office. The postal clerk asked what I had been working on, and he ended up recognizing my work from an earlier show. 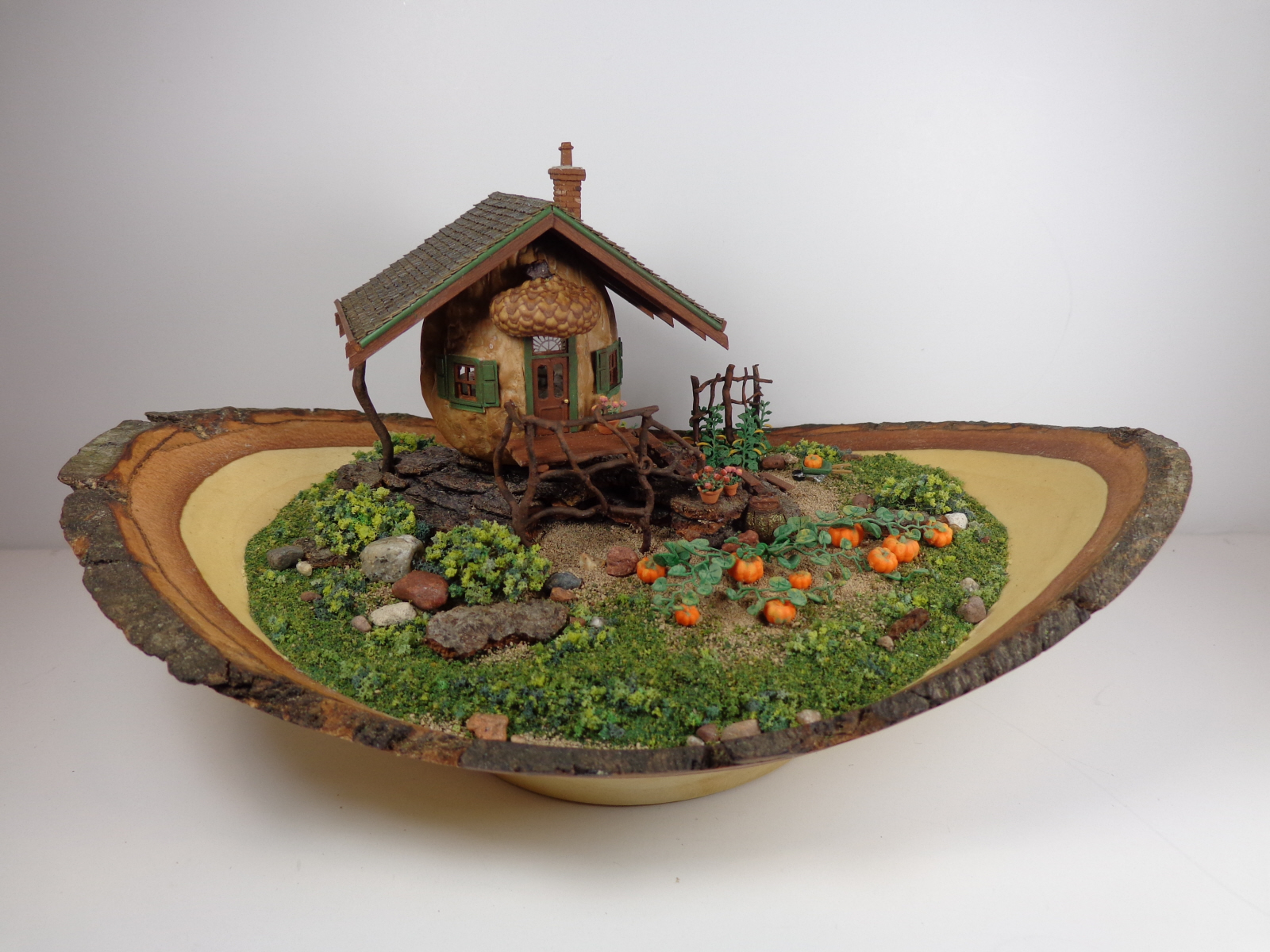 Over the years, I tried to do other things aside from miniatures, but in the end, I came to this because it was what I was meant to be doing. This is what I’m supposed to be doing. If something is in your heart, then that’s what life is for.

It’s always been houses for me. Even when I came across miniature pumpkins, I would say “They would be a great little house!” and my friends would respond “Everything is a little house for you, Nell.”

A few years ago, I made a walnut house with an extensive landscape under a dome, and took it to Philadelphia Miniaturia. A woman who had been enjoying it earlier came back and said, “I’m going to buy that for myself. I’m turning 50 next week and when I look at this, I’m at peace.” 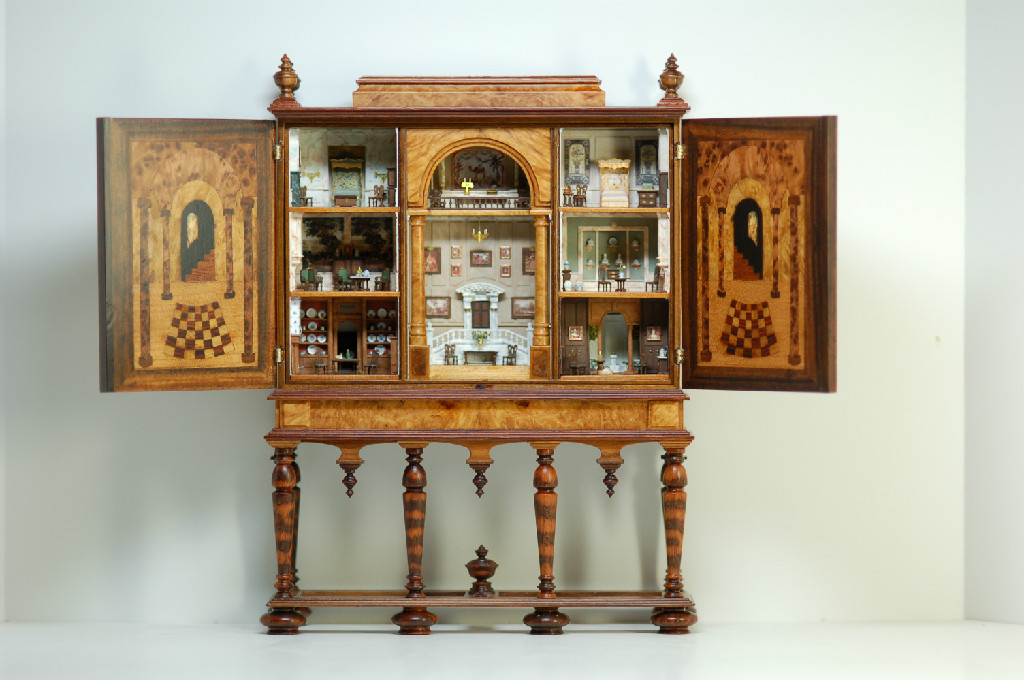 It means a lot to me to sell to customers and get to know them and speak to them. A short time later, in the mail came a letter filled with 50 miniature origami paper cranes. The woman who had bought the piece said she would sit and look at it for hours, and lose herself in that piece. It meant so much to me that it meant so much to her. And that’s part of it all. The connection you can make with another human being.

I have a Pre-Columbia piece, a pot from about 500 years ago and I can feel the finger grooves. It’s as if I’m touching that person across centuries. And I enjoy the creative experience of an artist sitting at home. I love that too. But the work has a life of its own. So when you start making art, and it goes in a different direction, that’s fabulous too.

Nell Corkin has been a member of the National Association of Miniature Enthusiasts (NAME) and of the International Guild of Miniature Artisans (IGMA) for many years. She was awarded the title of IGMA Fellow in 1998, and previously served as IGMA President. She’s now the 1st Vice President.  For more on her wonderful worlds of miniatures and miniature houses, visit her website or check out Nell Corkin’s blog.

spread a lil love with #dailymini