How did you devise such the brilliant concept of The World’s Smallest Portfolio? 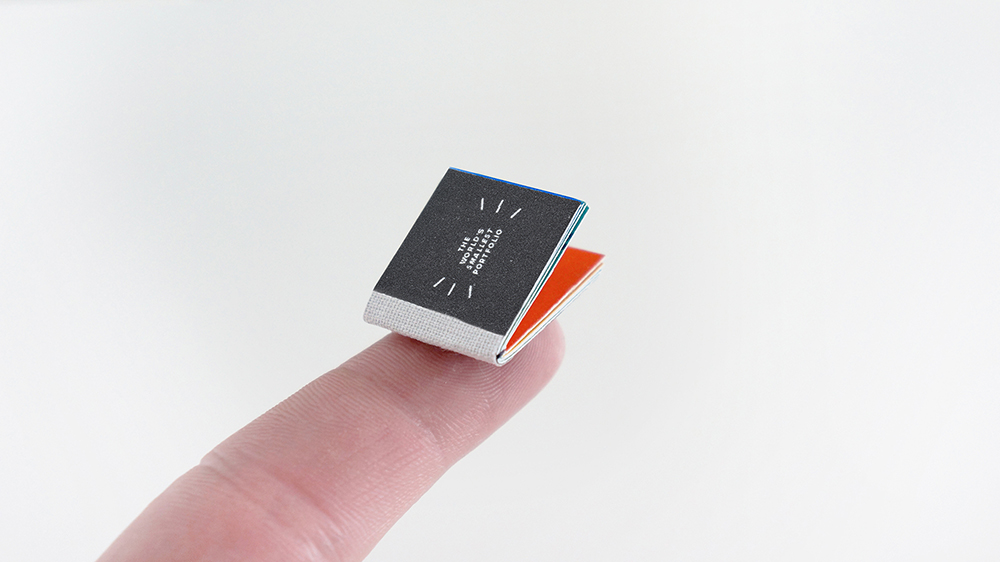 The idea came from a great little self-promo brief by London illustration and animation studio, jelly London. The studio team asked students and graduates coming to their D&AD New Blood festival talk to get people talking about their own work. I knew I wanted to not just get people talking about my work as a whole, but specifically about the concepts rather than the style. So I set myself a challenge: “How could I present more of my ideas and less of my visual style?” My answer was to make something so small that only a really strong idea could still be communicated.

How long did it take to make each miniature portfolio?

The actual making took around 3 hours once I got the hang of it, but getting the first one right took a couple of days. The designing and prepping took about a week. I made 5 portfolios, each by hand, and each hand-signed.

What type of work is featured in The World’s Smallest Portfolio?

The work inside is a mixture of work I’d made previously and work that existed as a quick sketch or idea. A few of the ideas were created as part of my ongoing illustration work for IBM and Ogilvy, for example the Brazil flag eye was made during the world cup last week for their blog, and the Europe flag was a poster and animation I made earlier this year for them. The girl keyhole was literally just a sketch I had lying around. So it was a fun process to take these pieces of work, all at different stages and try and bring them together.

What materials went into the creation of The World’s Smallest Portfolio?

Here’s the complete list of things I used after printing, in the correct order: cutting board, craft knife, ruler, Wenger swiss army knife (reamer to score), bookbinding awl, needle, thread, bookbinders tape, magnifying card, Sharpie, and an elastic band. Having a bit of prior book binding experience was useful, but like most things in the creative world, skill is only a small part of it.

An interesting fact: the rainbow-esque strip at the end of the book was created by accident, the thickness of the card meant each page stuck out a little bit more. I originally planned to crop this down but in the end it became a memorable part of the design, I guess it’s good to not completely know what you’re doing! 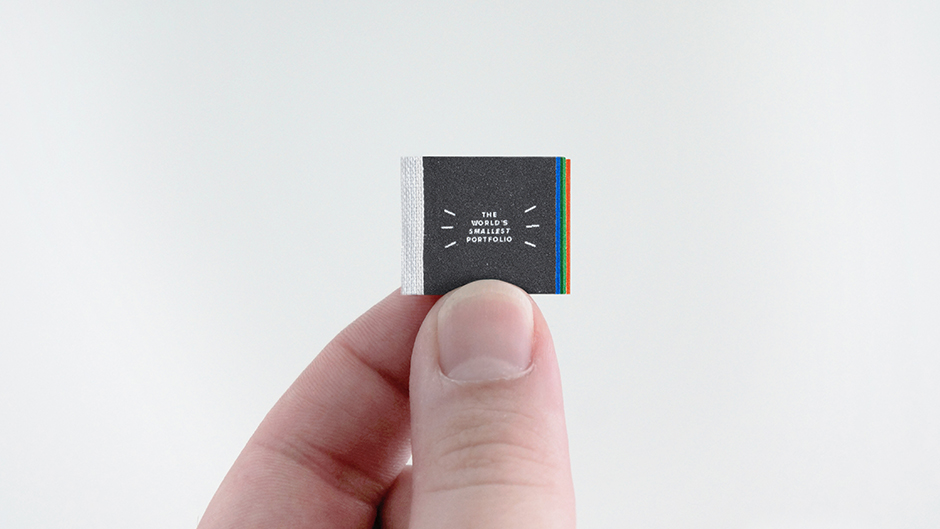 Having the opportunity to work in Paris for a year with Ogilvy straight from graduation was incredible and I wouldn’t be where I am without it. I’m still incredibly grateful to Chris Rowson (now creative director at Ogilvy NY) who saw my work, believed in me, and got me over there.

The only thing you should be focused on is making good work. In this age of social media, it’s easy to look around and think you’re behind everyone else. To think you’re not doing enough and spend too much time trying to promote yourself or gain a following to catch up…. Relax! Focus on making great work and everything else will follow.

Fellow designers that inspire you?

One of my favorites is Alan Fletcher. His book The Art of Looking Sideways is an incredible homage to imagination, and really got me into visual playfulness. There’s no order to the pages, it’s just a huge collection of stray (but very intelligent) thoughts. I actually found it lying abandoned on a street corner which is the perfect way to discover a book of randomness!

Plans to work with miniatures in the future?

The World’s Smallest Portfolio served an idea. It came from a problem and that was the best solution I could devise. If another brief requires some small thinking, then I’d definitely go in that direction again, but we will just have to see what crops up!

Other miniature work you enjoy?

As a kid I was obsessed with Kinder egg toys (okay, I still buy them from time to time). My studio desk is full of all kinds of little plastic figures.

Other activities you enjoy?

I dabble in guitar and enjoy reading existential philosophy.

I have a big exhibition coming soon which right now I can’t say too much about but it’s very exciting!

Flip through The World’s Smallest Portfolio by Michael William Lester, a freelance designer and illustrator currently based in London, UK. You can check out more of his work online, or follow along on Instagram, Twitter, Tumblr and Behance.