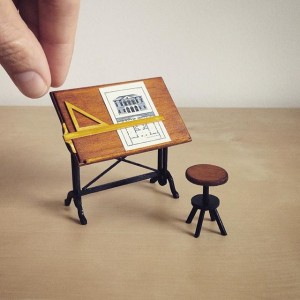 I have always been obsessed with the microcosm. All my play as a child explored this theme; I loved miniatures because they were small and secret… something most people walk right by without noticing. My favorite game from as early as I can remember was to run around and pretend I was a bird flying in the sky, imagining the patterns on the sand at the beach, grass or carpet were vast landscapes. Crouching down close I could see all their tiny and intricate details as a giant. I also loved to create tiny houses and towns in the garden for the fairies. When I was five, I discovered dollhouses existed and from that point on, I collected anything which looked miniature, including all sorts of junk (bottle cap chairs or shell plates). By the time I was 10, I had a significant collection of random objects which were very precious to me!

Can you share a first memory with architectural design?

When I was 10, we moved from the far north of the Queensland to southern Victoria. The architecture in the south of Australia is vastly different to far north Queensland and it blew my mind. There are no decorative or historic houses up north due to the destructive tropical climate. Victoria however is full of whimsical Victorian era houses with decorative ironwork and beautiful eclectic designs. The age of the houses was also amazing to me. Up north most houses are modern, and there is no sense of longevity or history in them. These houses down south captivated me with their antiquity. From that time on, I became obsessive… drawing houses and riding my bike around mapping their locations and looking for more. By the time I was in my later teens, I was familiar with all the historic houses in my city and could tell you their location if I saw them in the real estate pages of the newspaper. My fascination with architecture and building history has never relented. 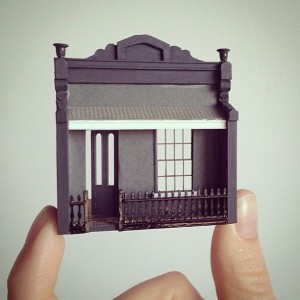 How did you first get started making miniatures?

My interest in miniatures stems from my interest in architecture and my fascination with microcosms. I began to seriously try and make miniatures when I was around 13. I planned a large dollhouse, and got as far as making the shell. However, I didn’t really know how to complete it and it was left unfinished and had to be thrown out (it was also structurally unsound!). However, I tried a few more times and had properly finished my first dollhouse by the time I was 19. The architectural style of my dollhouses is always in accordance with the architectural period I am interested in or studying at that time. I have finished about six more houses in the decade since: three Victorian houses, two mid twentieth century, one Georgian and one Swedish Gustavian Style house.

Do you remember the first miniature you owned?

The first “proper” miniature I ever had was a tiny plastic cognac bottle which came off the decoration on the front of a full size bottle which my Uncle bought in Switzerland when I was five. He took the real cognac and threw me the tiny one. I treasured that bottle because it looked so realistic to me and I still have it today!

What is the most challenging miniature to make?

For me, furniture is the most challenging. I move through phases with miniatures. At the moment, I am focused on 1:24 furniture, in particular chairs. Before that, it was 1:24 houses, and before that 1:12 houses. I expect I will get back to the architecture side soon, after I have mastered furniture! Furniture is difficult because you must build it from many constituent parts, all of which must be designed so they fit together properly and are at the right scale too. Sometimes you can create a piece of furniture which looks nothing like what you set out to achieve, and so it is a process of trial and error. 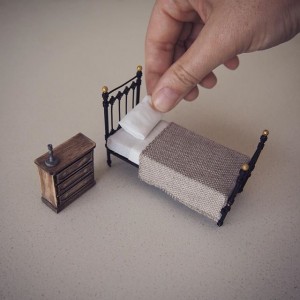 What’s your favorite period and type of architecture?

In my architecture studies I have been most interested in pre-industrial revolution architecture. The great thing about miniatures is that you can explore whichever historical period or modern movement you are interested in in a tangible way without having to spend lots of money or travel around the world. I am coming out of a two year phase of serious interest in neo-Gothic architecture. It has been so interesting to study the genesis of the movement in Britain, but then learn how it mutated when it arrived Australia and later the U.S., and how each country has interpreted it through their own sense of climactic conditions and social. I have been exploring this period at the moment while having fun making Gothic style furniture and a 1:24 middle class American style Carpenter Gothic house.

Currently, I am working on a project in which I am trying to create an exact miniature replica of a pre-fabricated colonial cottage producing in 1833 for settlers to Australia from Britain. I found details and plans of the cottage in an historic book published in 1833 (Loudon’s Encyclopedia of Cottage Farm and Villa Architecture, Vol 1). I am halfway through the project and you can follow my progress on Instagram. It has been a great way for me to learn more about colonial architecture in Australia, as well as the framing and structure of the building.

In addition to neo-Gothic architecture, I adore the austere colonial Regency and Georgian Architecture of the early settlement of Tasmania. Tasmania was the first state of Australia to have a significant settlement, and most of the oldest buildings in Australia are there. I have spent many trips traveling to Tasmania to study and photograph these beautiful (and often forgotten) buildings.

Who are some of your favorite miniaturists?

My favorite miniaturists are usually those who have managed to achieve a great degree of realism and quality in their work. These include some obvious names, such as Mulvany & Rogers, Pat and Noel Thomas, as well as Tarbena Miniatures and Small-Time Miniatures. These miniaturists are professionals who only produce miniatures of the highest quality. Another favorite of mine is Patty of MinisX2 on Etsy, who produces wonderful handmade mid century modern furniture. 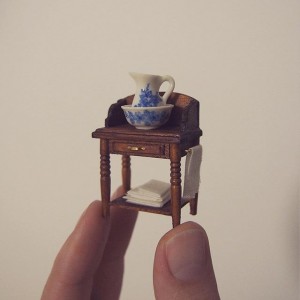 I particularly love Sir John Soane. He was a British architect practicing in the late 17th and early 18th century in Britain. His impact was so great that buildings built by some of the great twentieth century architects, such as Venturi and Kahn were influenced by his work. I find it fascinating how architecture is a fluid thing. One movement influences another, sometimes imperceptibly, but it is always possible to trace the kernel of ideas back in time, sometimes even hundreds of years.

I would advise miniaturists to immerse themselves in experiencing and/or looking at real images of the objects or buildings they want to recreate in miniature. Too often, poor quality work is produced because the maker does not have a good visual understanding of the real object they are trying to recreate in miniature. When I find a new topic of interest (for example, Victorian parlour furniture) I study it obsessively, and immerse myself in images of that type of furniture. I will borrow dozens of books and relentlessly scour the Internet for reference material. I visit antique shops and study the shapes, sizes and materials. This is because I always strive for realism in my miniatures, and this can never be achieved without observing life very closely.

What is the most memorable miniature you have ever seen?

I visited the most amazing dollhouse shop in London while I was there this past June. The shop was run by an elderly lady and was packed from floor to ceiling with incredibly high quality miniature things. The lady who owns the shop is famed for her habit of not selling a tiny thing to a customer whom she does not deem worthy of the object. After about 30 minutes in the shop chatting to the lady and her devoted assistant, she must have decided I was worthy because she called me over to see “her best miniature.” It was a tiny working Swiss army knife created by miniaturist Laurence St. Leger. The object had won him the 2015 Perfection In Miniature Award at the Kensington Dollshouse Festival. Notwithstanding the object’s significant value, she allowed me to hold it and photograph it. She also told me that he had made another one a couple of years before, but it had fallen out of his hands and took him three years to find again… 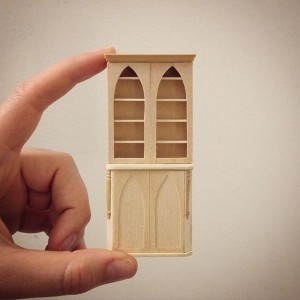 I would like to see more realism in dollhouses in terms of architectural accuracy. I hate it when companies create mass-produced houses which look awful because they are out of proportion or because the designers haven’t bothered to understood how houses of a particular style actually look. The Jasmine Victorian Dollhouse Kit by Laser Dollhouse Designs Inc. is the perfect example of this. Unfortunately, there is too much mediocrity in the mass-produced, cheap market. It can be difficult to get an authentic and well-designed house kit which does not cost the earth. In the long term, I plan to create a line of dollhouse kits which are architectural accurate but also inexpensive, for collectors and architectural enthusiasts who can tell the difference.

What would you like to see replicated in miniature that you have not yet seen?

I would love to see more architecturally accurate dollhouses from a range of periods beyond the standard Victorian and Tudor. There are so many wonderful movements and styles from throughout architectural history that are never really explored in miniature. I would also like to see more miniatures which are not just focused on English or American architectural styles as well. For example, traditional Japanese and Chinese architecture is incredibly beautiful and would translate wonderfully into miniature houses.

What’s to come from Little Architecture?

In addition to the new website, I have begun research for a range of commercial dollhouse kits which are architecturally accurate. I want to produce a wide range of houses, both from historical time periods as well as different cultures.

Emily Boutard of Melbourne, Australia is the creator behind Little Architecture, formerly known as Architecture of Tiny Distinction. She quit her job as a corporate lawyer to study architecture. You can see her miniature architectural designs and mini creations on the Little Architecture Website, blog and Instagram. Make your own by following her latest tutorials!