How did you first get started in miniatures?

I had a three-year-old daughter and decided she needed a dollhouse for Christmas. The more I put it together, the more I built it, the more I loved it. 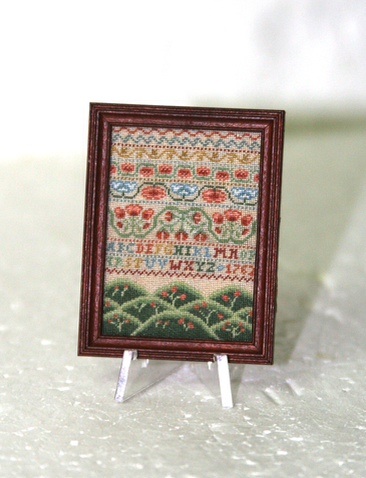 It was that very Christmas that a friend said a doctor in Oak Ridge, Tennessee was going to be at the local museum showing the dollhouses he made. I learned then in 1978 that there were dollhouse magazines and a miniatures shop in Gatlinburg.

The next year was the development of my passion. I was initially buying works at the nearby miniature shop in 1979, and that year I met a gentleman who was selling his miniature work at a crafts show. Through that connection and others, we formed a club in January 1980 and held our first meeting. We grew from about 4 people at first to 30 passionate miniature enthusiasts. We met for 20 years until about 2000.

What was the first miniature you created?

It was a sofa and a chair. I used a pattern from one of the club members. I was a crocheter and building this dollhouse at the time. I still have that crocheted rug from that dollhouse I built for my daughter.

When did you begin selling miniatures?

There was always a miniature show in Atlanta and in Lexington, Kentucky. We all learned about these events through well-known dollhouse and miniatures magazines. My next door neighbor had bought a dollhouse after seeing my own. In 1980, she was creating needlepoint rugs and she taught me how to do needlepoint. And I absolutely loved it. I loved it. 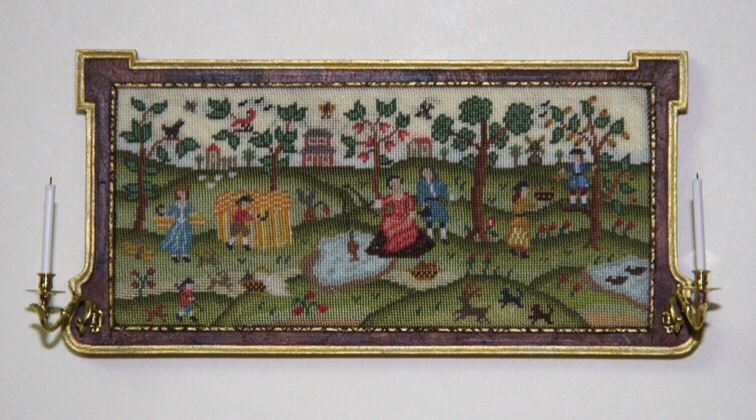 There was a show in Atlanta around April 1981, and one of the premiere needleworkers at that time was Barbara Cosgrove, who happened to be at that show. She made rugs and had a beautiful display. Down on her table, she had a small sampler. It took my breath away. It was an adaptation of an antique sampler. She shared more information about samplers from the 17th and 18th centuries. I immediately made a trip to the library in my hometown and checked out a book about antique samplers. That was the beginning of my design process. I was just so incredibly intrigued with antiques. My thought process at the time was, “I wonder if anyone would buy any of this.” And so, I showed work at my first show in October 1985.

My second show was April 1986: the IGMA Guild Show. I was very fortunate to have been accepted. And I did very well at that show. Actually, I lost my voice after it! I grew hoarse from explaining at length what antique samplers were. 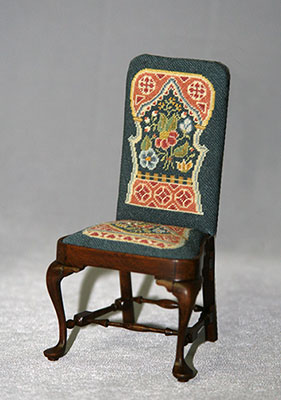 After learning about miniatures and antique samplers, I began my extensive research. I wrote and corresponded with various museums across the country. Wherever I had a show, I would look up the addresses of museums and curators. Over the years, I’ve had many special appointments, mostly focusing on the history of antique samplers. On one particular visit when looking at designs in storage, I came across decorative chair seats. These captured my interest as I had never thought about that as a needlework possibility. 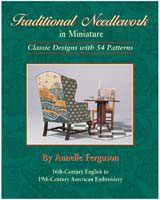 I decided shortly after to write a book, wanting to inform the miniature industry about the history of needlework.

To this day, I still do research. Now it’s more on the computer. But I still have special appointments at museums across the world, whose teams are kind enough to bring out needlework for me to see and study.

Rhode Island samplers from the 18th century. An instructor in Providence created the most charming samplers I had ever seen.

What have been some of your favorite collaborators to work with? 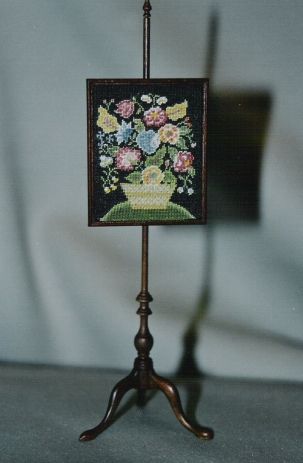 My favorite collaboration or project is one that I shared with others. Specifically I loved making a casket from the 17th century that we did here at school. Mark Murphy made the box. We taught the class over a 2-year period.

Materials you could not live without?

Silk gauze and silk threads. Years ago, at the IGMA Guild School in Castine, they had a “Then and Now” exhibit that featured people’s first works. My first creations were on canvas with wool and were quite funny to see.

What advice would you give to a new miniaturist?

The more you do, the better you get, the more experience you gain. People often rush in and don’t give themselves enough time to master their craft. 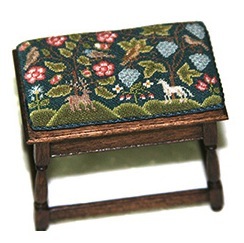 What do you want miniature fans to know about you?

I’m envious of those that are multi-talented. I decided long ago that creating miniature needlework was my passion.

I have one completed dollhouse currently, a country house. And I have several unfinished projects in the works because they need a piece of needlework and I still haven’t gotten to it.

I thoroughly enjoy participating in miniature shows. It continues to be a pleasure seeing, meeting, and visiting with other miniaturists.

Annelle Ferguson is a 22nd year instructor at the International Guild of Miniature Artisans (IGMA) Guild School. She hails from Tennessee and you can view her work in miniatures on her Mini Stitches website.