I grew up with a dollhouse and a mother who loved little things. I started out collecting from an early age and soon amassed a nice collection. One of the best miniature sources at the time was Marshall Field’s in Chicago. 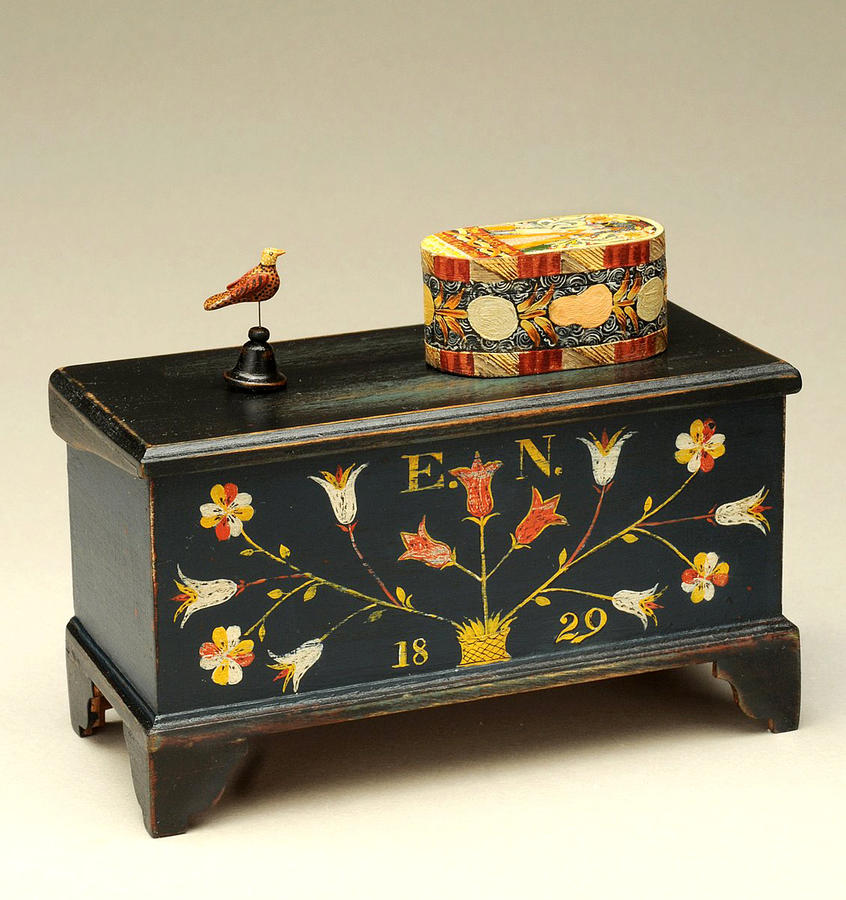 Now, I grew up in Dallas, but my parents went to Chicago and bought dollhouse things for me and lead soldiers for my brother. From an early age we learned to appreciate these toys and not to play too hard with them. And so, I’ve always been fascinated with little things.

Years went by and when I had a family of my own, I worked on a train layout for my sons. The following year I thought, “why don’t I refurbish the dollhouse?” At that time, Chestnut Hill miniatures were available and at Marshall Field’s, they had Harry Smith’s Barnstable collection which was great quality. I was always attracted to handmade antiques. I began refurbishing my old dollhouse for my 2 daughters (I have 6 kids) and came across a miniatures shop in South Bend, Indiana. The items for sale were quite expensive so I started making a few things that could be sold at the shop – ranging from books, paintings and more. At that very same time, I was collecting American pewter.

In 1973, I began buying more and more stuff for the family dollhouse. I wanted to support my habit as it was becoming increasingly costly. On the way back from a show to look at American pewter, we were in my husband Dan’s Corvette which didn’t allow for big purchases. I said aloud to Dan, “If I ever did anything in miniature, I’d like to replicate American tinware in authentic pattern.” 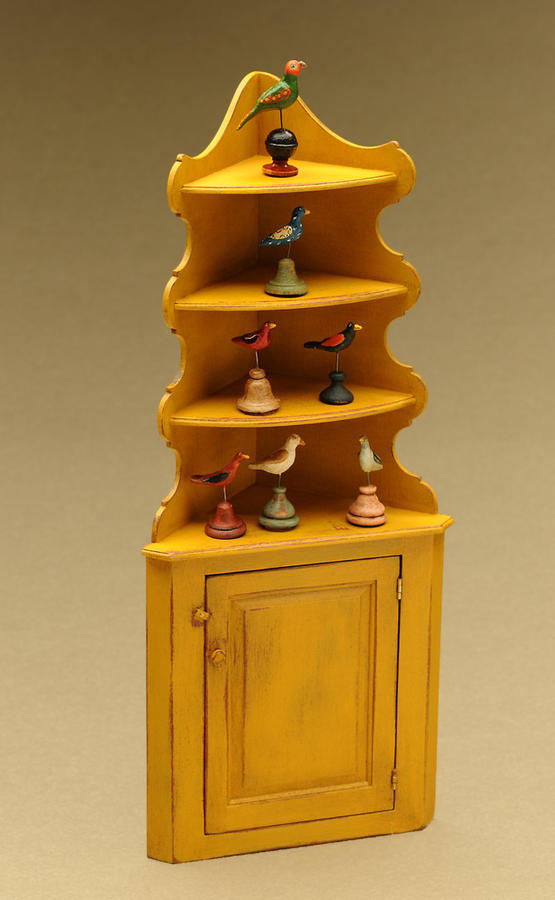 The first piece I made after that trip was a document box made out of cardboard. I painted it so it appeared to be tin. I picked out a simple, authentic pattern and one thing led to another, which led to another. I was pretty hooked. It became my pastime, my hobby, my escape, my passion.

As time went on, I wondered if I could make some grocery money making miniatures. So, I put my nose to the grindstone and started to make a little production. I met other furniture makers, artisans who focused on tools and dyes. People were always so nice about helping me.

The woman at the local miniature shop told me about a show coming up in Sandusky, Ohio. It was a great way to get my feet wet. So that was my first show. There was a little circuit at the time, so people would always ask, “would you be interested in participating in the next show?”

For a long time, Dan and I traveled to shows within driving range from our Midwest home. Later on, I was invited by the National Association of Miniature Enthusiasts (NAME) to do house parties. So I went to Denver to attend that show. It was there that I met IGMA Guild School Director Barbara Davis for the first time. She was living in California and she made miniatures. Our interests align and we felt an instant connection with one another’s work. For many years, she would make miniatures and I would decorate them. Both Barbara and Mark O’Grady are both known for their beautifully painted, distressed antique furniture. They would create a piece and finish it off with paint, then I would add a decorated pattern after which they’d make the piece look worn and antique. Their finishes were smooth as satin. Barbara and I made work for more than 30 years together. After that first show, Barbara connected with Carol Hardy. That particular Denver NAME event opened up a lot of doors. 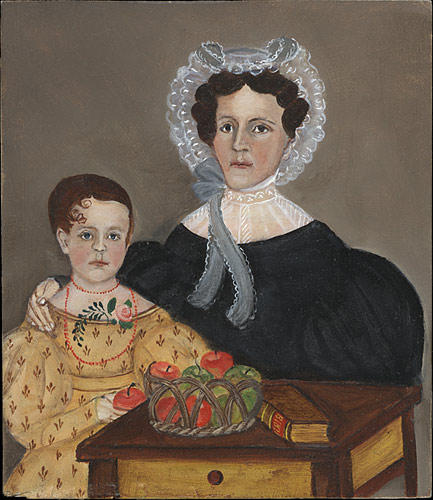 As a home economics major, I had previously taken some art classes. I never considered myself clever or talented. I never thought of myself as an artist. However, when I started the tinware patterns, these styles really resonated with what I liked. I was painting in acrylic at the time. After meeting a woman who taught country painting, she encouraged me to try the medium of oil painting. I enrolled in her class in the 1970s and when I started painting these patterns, I felt they were familiar to me. As if I had done them before.

I’m convinced that in another life, I was one of those flower painters that did those patterns. It all came so naturally. It was never necessarily easy, but it came naturally.

What types of antiques and miniatures are you most interested in?

I absolutely love New England antiques and history. For a long time, I wanted to more east. I was studying the tinware patterns of Connecticut, Maine, Pennsylvania, and Vermont. There were so many different tinware facilities at the time. I learned about the women who decorated tinware and the men who made the objects through assembly line. 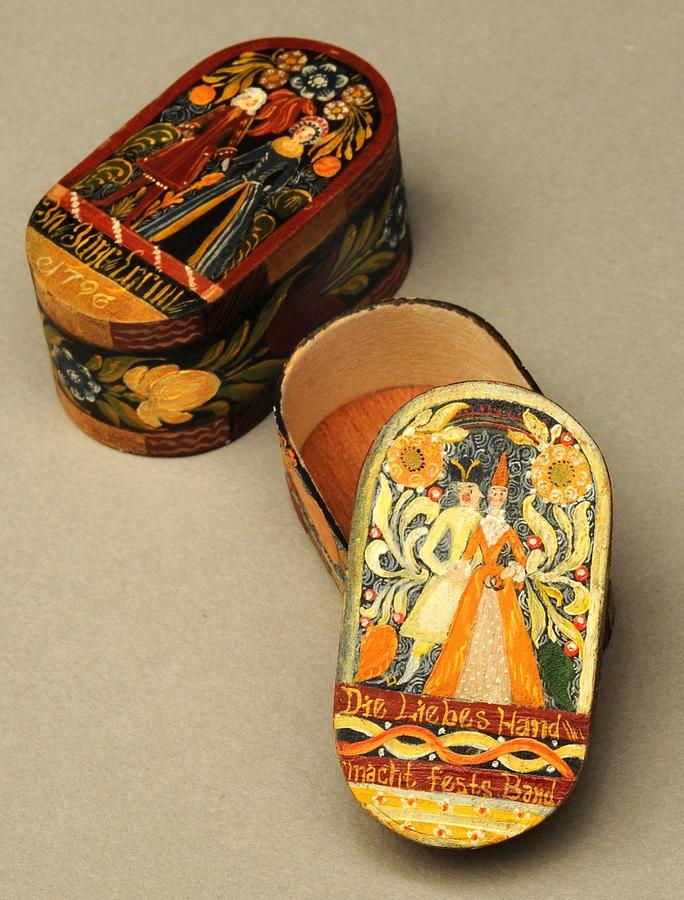 For about 15 years, I did nothing but tinware. Soon enough, I could tell right away whether a pattern’s origin was from Connecticut or Pennsylvania. I grew to have an eye for these things and eventually found patterns on other objects. One in particular was a wooden bride’s box in the American style. Those these boxes are probably European in origin, the only one I recognized was painted in the United States. So I painted those bride boxes (similar to the concept of dowager’s chests). I remember being very excited by the prospect of a new bride box pattern to try, and it soon became my favorite style.

How did you become involved with the International Guild of Miniature Artisans?

I was involved with the Guild at the very beginning. When I attended my first Guild Show, the other artisans encouraged me to become a member of the Guild.

The Guild always made artisans feel very accomplished by the work they were doing. It’s so nice to feel that this work in miniature is a serious art form. It’s not just cute stuff. It’s serious and we’re serious about it. My membership with the Guild led to so many avenues of opportunity. And tons of friendships came out of it. We share mutual interests and it’s fantastic to have the opportunity to collaborate with other artists and designers.

Technique you cannot live without?

My “Jenny Craig stroke.” Whenever I am painting, I take another brush, one that is clean and slightly damp. With that second brush, you can take a crooked line and thin it out. You can edit your work without disturbing the rest of your design. It’s easy with this technique to reduce, refine and erase. It will save you frustration! 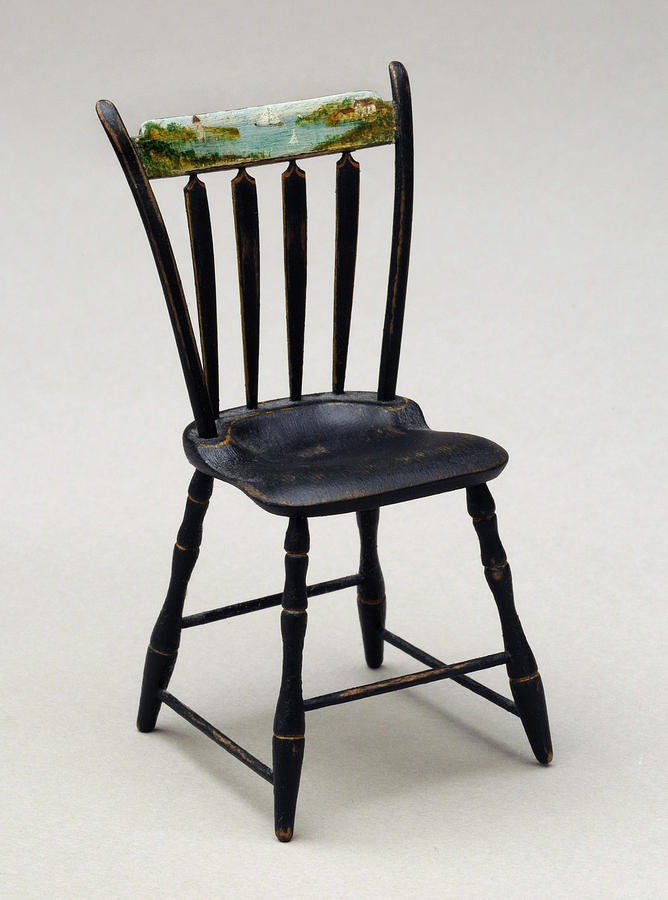 When I teach, I say “you’re going to make mistakes. Don’t get frustrated, learn from them. There’s often an opportunity to remedy it.” This logic helps any artist feel more in control of their work.

What do you want miniature enthusiasts to know about you?

I’m doing what I’m supposed to be doing. It’s always felt good. And it continues to feel that way today. I love the challenge of doing something hard, and ending up really pleased with it. Every time I will do a series, I am always thinking, “how can I make this a little better?” I am always trying. And I’m very competitive within myself.

I don’t spend a lot of time looking at other’s artist’s work. I don’t want to feel as if I copied someone.

I just love what I do. And I won’t live long enough to do all my projects. There are just so many things I get excited about – I am never bored!

What advice would you give to a new artist?

Take advantage of where you are in your career. Take advantage of the area of study you’re in. There is a wealth to learn on the Internet, so explore what’s out there. And take a class. Pursue a study program. And join the Guild!

Mary Grady O’Brien is a 27th year instructor at the IGMA Guild School. She has lived in Dallas, Indiana, New Jersey, Illinois and Wisconsin. Her highly-detailed work in miniatures continues to mesmerize many a generation of miniature enthusiasts. To see many more minis by Mary, visit her website. Check out what her students had to say:

“I’ve taken classes with Mary before, but this is my first time with tinware. This class is great!”
—Peggy Meyers, 8th year IGMA Guild School student

“I’ve not worked much with oils before. I’ve enjoyed Mary’s class because it’s relaxing, and at the end of the day you need something that’s going to bring you down instead of staying stressed. Mary’s so easy going and a pleasure to be around. I’ve known her for a long time.”
—Ann Miller, 12th year IGMA Guild School student 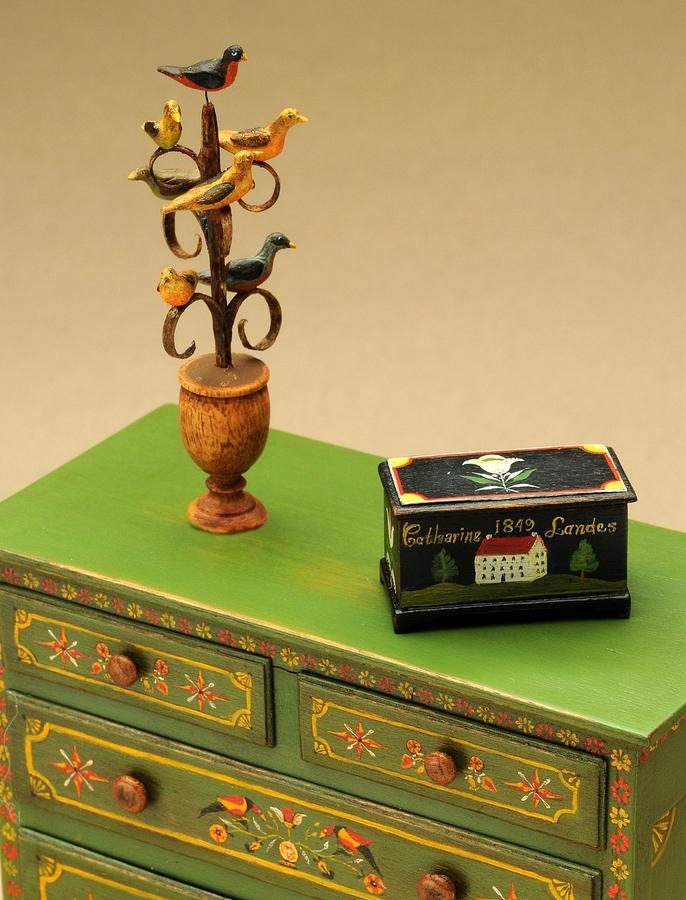