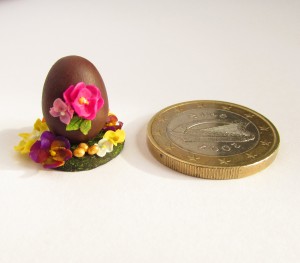 That would be being completely fascinated by the lights in my first dollhouse which, I only realized in recent years, was a Lundby. Wish I still had it!

How did you first get started making miniatures?

It’s something I’ve loved pretty much as long as I’ve been able to think! As a child, the new Dolls House Emporium catalog arriving through the letterbox (in the days before the Internet!) was a highlight in the calendar! I was so intrigued by all the tiny things and I have, to this day, a beautiful dollhouse built for me by my late uncle.

Tudor houses have always caught my imagination and, just a few short years later, I was also lucky enough to own a stunning Robert Stubbs house.

Where does the name Homewardflight come from?

At the time of Homewardflight’s inception, we were planning a return home to Skye after a few years away – our homeward flight. It just seemed to fit and now we just couldn’t be anything else, it’s a part of me! 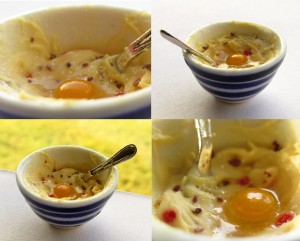 Describe your collaboration process as the mini making duo of Sadie and Val.

The great thing about running a business with someone, is being able to bounce ideas off each other. Having said that, I’m the sculptor and Val deals with all those other things that you have to do when running a business!

Do you remember the very first miniature you ever made?

The very first miniature I ever made was a small cherry cupcake with white icing and, to this day, I can still recall that initial feeling of amazement at seeing such a tiny version of the real thing come to life. I still have it; it’s on my worktable!

What is your favorite type of miniature to create?

Truthfully, it’s whatever I’m working on at the time – it never gets any better than that! I think, with minis, you get so completely absorbed in what you’re doing that it really does become all about that one thing.

What is the most challenging miniature you make?

The most challenging thing is often when you sit down to create something you’ve never done before. The longer you’ve been making minis, it’s amazing how often there’s a skill which applies from something you’ve made before to help you along the way! 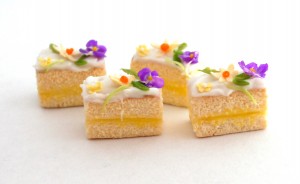 Can you tell us a bit about the traditional British food features you’ve been working on for Dolls House and Miniature Scene (DHMS) magazine?

Originally it was meant to be a 7-part series, but there was so much delicious “comfort food” that it quickly evolved to eight! The last part of the series features a spring picnic scene and it was wonderful to be able to combine both my great loves in the mini world – food and nature. As a project series, it’s quite wide ranging so there’s something that will appeal to everyone and hopefully make most people think, “I’ve got to have a go at that!”

Any time spent creating something is never time wasted. Even when you’ve spent hours lost in something for it not to work out, the experience is always worth having. When you create that perfect version, you have to remember you couldn’t have done it without a few duds along the way!

Do you collect miniatures yourself? If so, favorite miniature you own by another artist?

When I get the time, I have a long list of items from artisans right across the mini spectrum that I want to add to my collection! I think one of the most intriguing minis I’ve ever collected is a doll – a Victorian cook – beautifully handmade with a face that looks like it has a lifetime of memories etched on it. Trouble is, I’ve never known who made her. At the other end of the scale, I have a counter and a till from Delph Miniatures which is one of my favorite things.

Favorite miniature you’ve made yourself?

As I’ve said before, it’s always the last thing I made! However, I love the Homewardflight range of cake slices as I never fail to be fascinated at the realistic texture of the sponge! 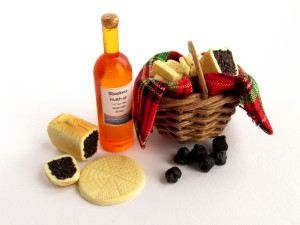 Cheese is a true favorite and something I can never make enough of in 1:12 scale. There’s something about a selection of different tiny cheeses and mini crackers! In fact, my very first venture for DHMS magazine was a cheeseboard which was part of a competition they ran one summer.

In life or in my work the answer is very much the same: my surroundings. Here on the Isle of Skye, we are surrounded by an abundance of good food and spectacular scenery that people travel from all four corners of the globe to see. For many of those people, it’s a once-in-a-lifetime experience being here, but I’m lucky enough to be part of it every day!

What is the most memorable miniature you’ve ever seen?

That would have to be a room box by Sally Watson of SallyCat Miniatures which incorporates a transparent wall between the spirit world and our world! Not only is it the most unusual piece I think I’ve ever seen, but it also taps into my own desire to create the unexpected in miniature!

Without question, Sally Watson, but also Teresa Thompson of Costume Cavalcade whose dolls are an inspiration to make you want to create a whole world around them! I particularly adore her Celtic figures. 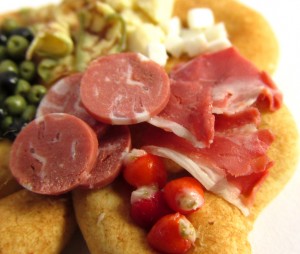 Like any of the creative industries, it has to continue to evolve and attract new, talented artisans into the fold. The advent of social media in recent years has definitely brought miniatures to a much wider audience. Hopefully, it will continue to do that. I’d very much like to think that, as time passes, with everyone ploughing their energies into making our industry the best it can be, it will achieve new heights!

How can miniaturists and miniature collectors help keep the art alive?

In the absence of a time travel machine, miniatures are the next best thing and there are so many places we have yet to travel to! It really is an endless craft and the most important thing is, without a doubt, to keep new ideas coming to the fore. I don’t think we need to do anything differently particularly but, as I said about the advent of social media and a wider audience I would love it if the mainstream audience felt miniatures were something for everyone… that you can have a beautifully handcrafted dish or piece of furniture on the mantelpiece without having to go the whole hog with a dolls house. These pieces work so well as a part of your big house too, just in the same way an ornament does!

What would you like to see replicated in miniature?

That’s something I often try to do in my own work – create things that haven’t been seen in small scale before and there’s something I’m working on as part of a larger magazine feature that I don’t think has been seen before. Otherwise, there are many building interiors/themes that are, as yet, an untapped resource of tiny ideas that I’d be thrilled to see someone tackle!

Why miniatures? What appeals to you most about what you do?

Because it’s an endless world, bound only by your own imagination. One day you can be wandering through the metaphorical countryside sculpting a wee mouse scuttling down a hole, and the next, attending a medieval banquet! I’ve always loved creating things and there’s nothing better than bringing what’s in your imagination out of your head and onto the worktable. 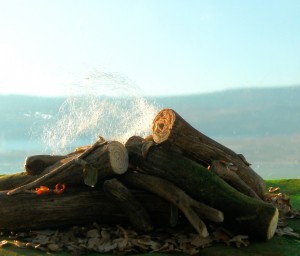 What’s to come from Homewardflight?

Oh gosh, where to start?! There’s lots coming up! There’s some very special commissions I’m working on. And there’s some fabulous stuff I’m working on for Dolls House and Miniature Scene magazine which will take me all the way into 2017! In addition to that, there’s loads on the way for our Etsy shop and the website along with, if we can find the time, something which will, hopefully, bring a favorite from the miniature world to a much wider market, making it something lots of people who’ve never been interested in miniatures will want. It’s something that we’ve been thinking about for quite a while. As I say, it’s just a question of fitting it in.

Words you live by?

“The only limits to the possibilities in your life tomorrow are the ‘buts’ you use today.” —author and motivational speaker, Les Brown.

A doll sculptor who made their excuses, exclaiming “I’ve got a body in the oven!”

Other activities you enjoy?

Photography is my passion away from the miniature world, although more often than not, the two worlds collide! Here in the Hebrides, we are lucky enough to have completely pitch black skies, and I spend hours taking photographs of the aurora borealis and the stars!

What do you want miniature enthusiasts to know about you?

I’m at my happiest when creating miniatures. My worktable overlooks the hills and the loch, and it’s the most perfect place in the world to be… especially at the moment when you realize a miniature has come together and it’s definitely going to work.

Homewardflight was created by Sadie Brown who’s based in the Isle of Skye, Highlands of Scotland. To see more of her work, visit the Homewardflight website, shop the collection on Etsy, and make sure to follow along on Instagram, Facebook, and Twitter. 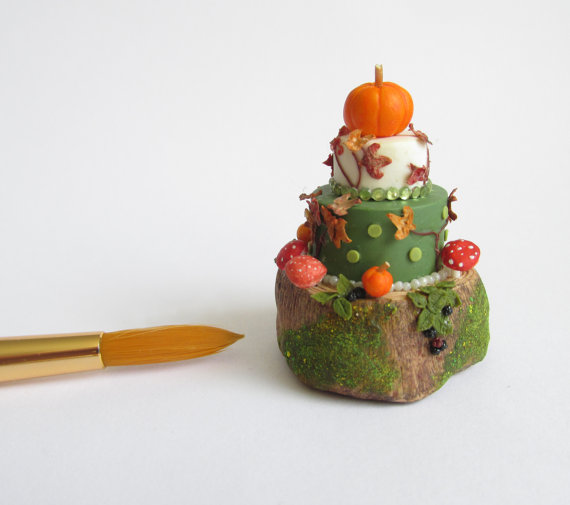