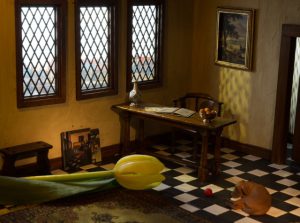 Robert Off had been captivated by Johannes Vermeer’s paintings for the past few years: specifically his ability to capture sunlight, use of soft colors, and masterly treatment of of perspective all combine to draw the viewer into his paintings. As one looks at several of his paintings, it becomes clear that most of the scenes were staged and painted by him in the same studio.

This box is Robert Off’s vision of what Vermeer’s Delft studio may have looked like in 1650. He goes on to share, “Not much is known about Vermeer and only 34 works attributed to him are known to exist today. It is also theorized by a number of scholars that he used a mechanical optical device known as a camera obscure, a device similar to a pin hole camera with a projector lens, to assist him in creating the correct perspective of the scene.”

Robert Off continues, “No one really knows what Vermeer’s studio may have really looked like or even if he used optical aids in his paintings. However, I used bits and pieces of what is known today to create my vision of what his studio may have looked like. Most importantly, I wanted to try to capture the mood of the place by using the elements of the sun light streaming through the windows; the small leaded window panes, the beamed ceiling and wood moldings, the complex pattern of the tile floor, the texture and detail of the oriental rug and the humanity and warmth of a sleeping a dog.” 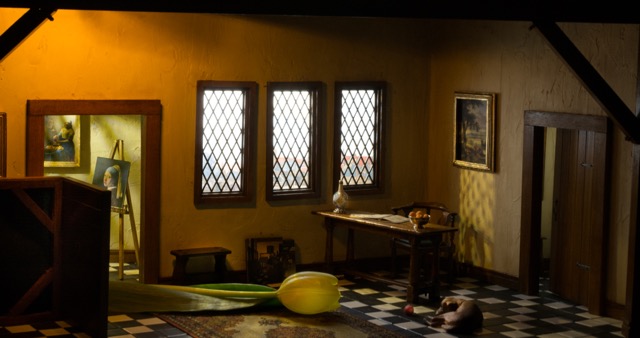 The view out of the window is a reproduction of Vermeer’s painting of the city of “Delft in 1650.”

The 550 individual floor tiles were made to my specifications in Germany by Rita and Horst Kruger. They also assisted in creating the pattern which was copied from Vermeer’s paintings.

The Delft vase on the table was made in Delft by artisan Henny Staring-Egberts, and the wood windows and the very delicate window mullions, were laser cut to my specifications by Scott Alessio in his New York shop. 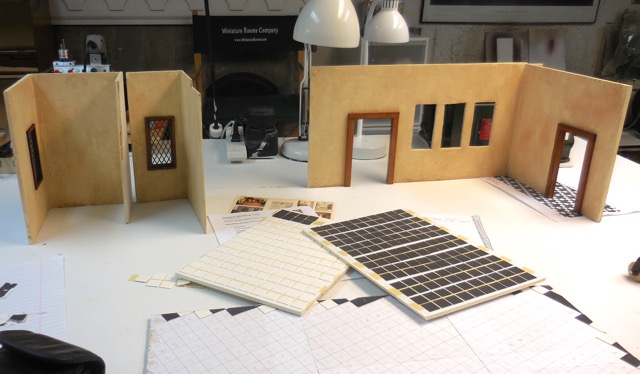 The section of a camera obscure on the left forefront of box was created by Robert Off who took artistic license in its design as nobody has the “wildest idea of what the actual camera may have looked like,” assuming one was ever used by Vermeer.

A yellow tulip was placed in the photo to illustrate the scale of the box, and also as a not-so-subtle reference to the “Bitcoin Mania” taking place around the world today and its similarity to the “Great Tulip Mania” which took place in the Netherlands over four hundred years ago in 1617.

Robert Off of Miniature Rooms Company hails from Cincinnati, Ohio. To see more of his work, check out miniaturerooms.com. To learn more about his inspiration and background, check out this dailymini interview.