The Museum of Working Miniatures

Describe your earliest memory with miniatures.

Great question! I remember having a couple of working miniatures when I was a child. I still have a couple of them (a miniature board game and a Rubik’s cube-style puzzle.) But I didn’t follow up with a collection until much later in life.

Where did you come up with the idea for the Museum of Working Miniatures?

The Museum of Working Miniatures YouTube Channel was established to showcase a unique collection of fully working miniature toys, games, electronics and gadgets.

By coincidence, I was gifted a couple of working miniatures in my 20s, (a miniature briefcase and a tiny working Etch A Sketch). They sat in my cupboards for many years—and when in my 30s I found them again, and wondered if you could get anything else that was a functional miniature. I found a few in High Street shops, but they’re not easy to find! But it was also the early days of sites like eBay, and it opened up a whole new avenue for finding them.

Pretty soon, I had hundreds in the collection! It’s been slowly growing ever since. About a year ago, I finally got the whole collection together into cabinets—and then thought “what am I going to do with this now?” If I ever lost them all, I don’t think I could ever find some of them again (and it would be a huge undertaking)—so I wanted to do something to record the collection. It was going to be a blog with photos, but then I realized it was best to show the items working, you really needed to see them move—so why not video? That began the creation of the channel—it was really just for me initially, to have some permanent record of the pieces.

Do you have a favorite working miniature you’ve featured?

Tough one! I’ve always got a soft spot for the working Victrola (Gramophone record player) that I featured in the very first video.

I just love how it not only looks like a perfect miniature scale model, but also works with real miniature records. I also love the Basic Fun Mouse Trap game key chain—perfect miniature replica of the board game down to every last piece—and it all works!

Do you have a favorite “non-working” miniature object?

I often order miniatures thinking that they’re working and then find out they’re not. I may do a video of these ‘Working Miniature Fails’ soon. I was recently given a miniature ship in a bottle, which I like.

It has to be Basic Fun. In the 80s, they started making replica mini key chain versions of classic games and toys, and buy the end of the 90s, they had a massive range. Their range of working arcade games are my favorite (Miniature Pinball, Crane Grabber, Rod Hockey, etc.) — and they’re also the rarest to find.

Have you ever made miniatures yourself?

I nearly did with the working miniature TV set. I struggled to find anything that fitted what I wanted (able to play a video through its own speaker and look like a TV set.) I was going to make my own from a little MP3 video player. But the collection is about curating existing items, not creating new ones.

Advice for those that love to collect working miniatures?

As far as I know, I’m the only one who seems to have this kind of collection—can’t find any trace of anyone else. But I’d advise learning to love Internet searching—you’ll be doing a lot of it. And make use of all the tools that sites like eBay have for helping you monitor keyword searches. 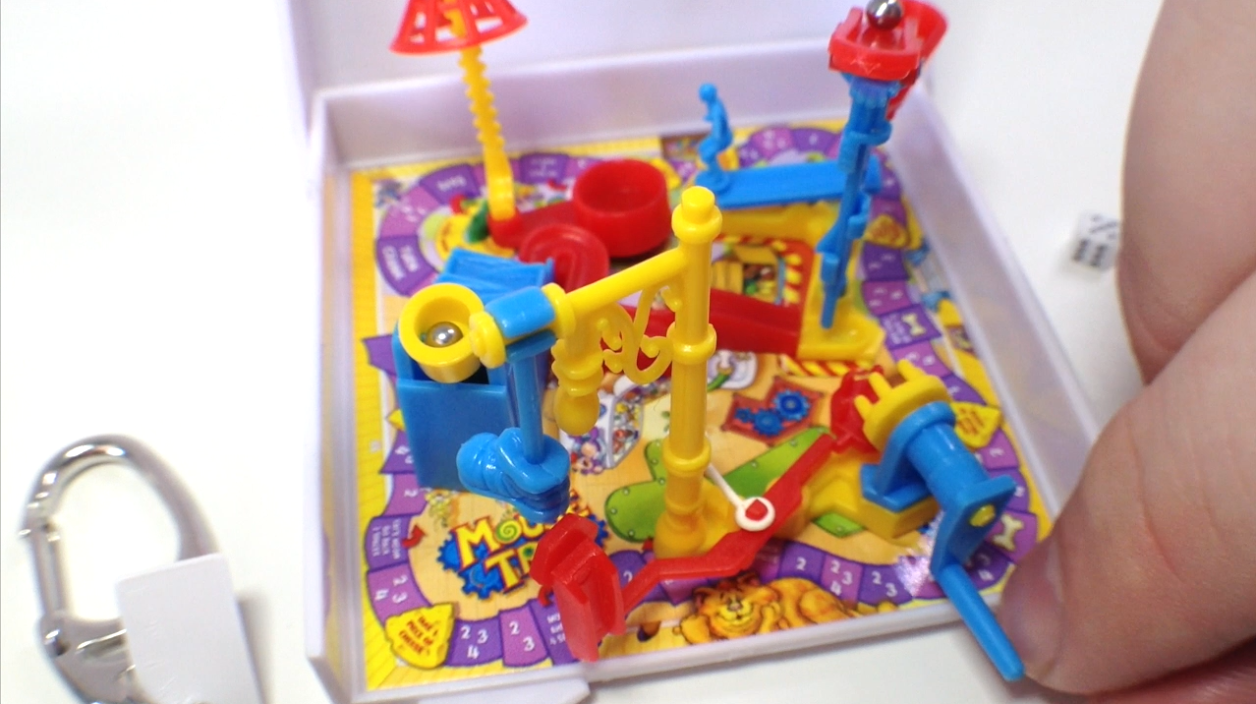 The YouTube Channels that really influenced me are the work of Ashens, who was a pioneer of reviewing something without showing his face (only his hands). Also, Grand Illusions, for showing that there may be an audience for unusual curios.

What is the most memorable miniature you’ve come across?

On Etsy, there is someone selling an extremely small working coffee maker. You can fit it on your finger. It comes with a tiny spoon and cup and a stand for a candle—it boils and a single drop of coffee drips out of the pot into the tiny cup. Absolutely insanity—but I have to get one one day! I also once saw a guy who made perfect working miniature lavatories—with perfect flushing mechanism! But he didn’t sell them as a business, so I’m not sure if that should be in the collection. I was really going for items that anyone (at the time) could have bought, not just one-offs.

What appeals to you most about what you do?

I really don’t know. Something about the very tiny world appeals to me. I’m quite tall, so maybe it stems from not wanting to stand out physically? But I also really love the design, craftsmanship, and engineering that goes into making such tiny things really work. It’s amazing!

What’s to come from the Museum of Working Miniatures?

Well, I still have hundreds of exhibits to film. I want to continue to plough through and record them all eventually. The ‘miniature fails’ video would be funny to do. And maybe another cooking video—the Cooking Bacon in Miniature video is still by far my most watched. I’m trying to find a tiny metal oven replica that you could theoretically cook with—I’ve got close recently. Fingers crossed. Oh, and I’d like to do some more competition giveaways. I have a few duplicates—a couple are the extremely rare Basic Fun arcade games so they would make great prizes.

The Curator only knows Curating. There IS nothing else. That and tormenting Colin, my robot assistant.

What do you want miniature fans to know about you?

I get asked a lot why I don’t speak in the videos and what I look like. I actually did speak for the first few. The environment I film in just doesn’t allow me to do voice-overs.

Plus, I really like my videos in ‘pantomime’ style. There are many other channels that do the same, and some are extremely successful. So… no plans to start speaking again. And as to what I look like? A little like Colin, only with a beard. 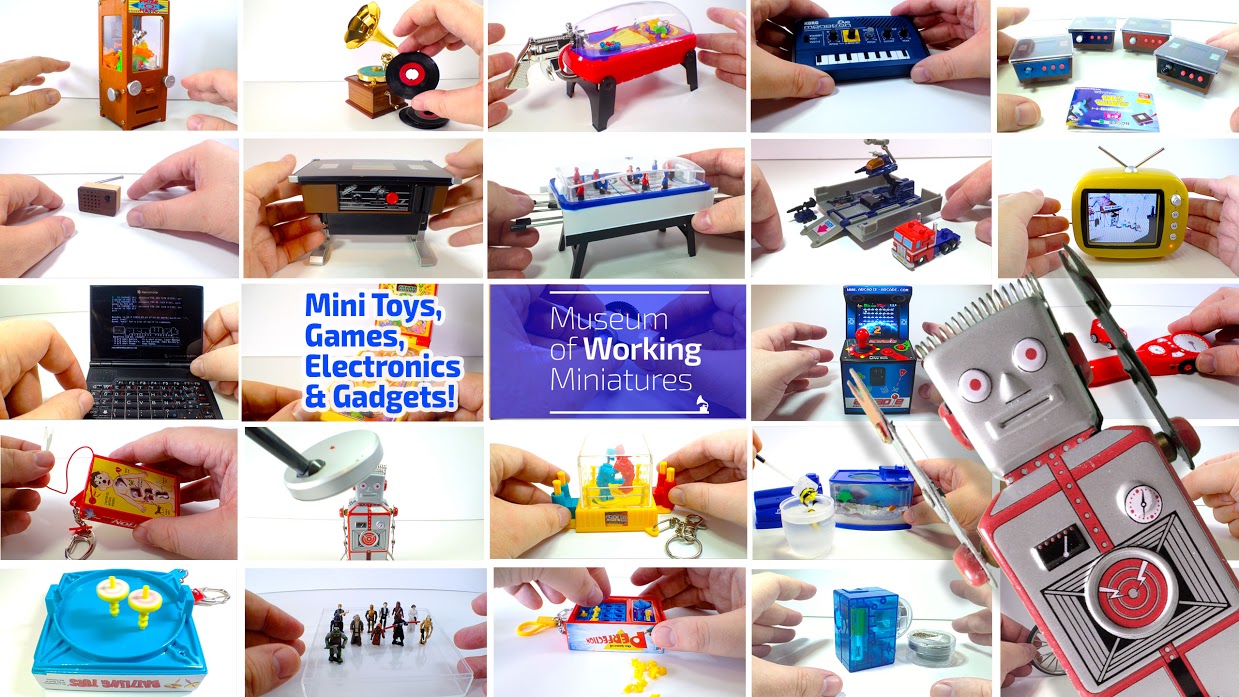